Woman Along the Nepal Conservation Trail 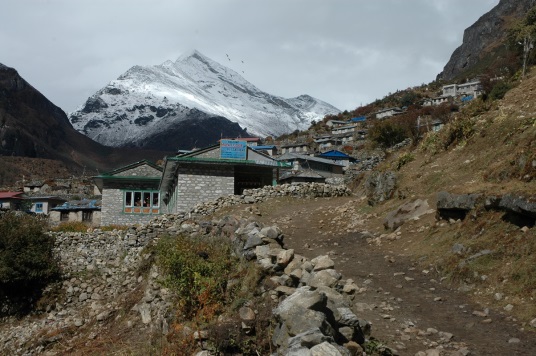 Ang Maya Sherpa from Thamo, one of the several settlements in Everest, has never seen a snow leopard, but many times she has chased away Himalayan tahr, local prey of snow leopard, from her vegetable garden. “If the prey is here, the predator must be somewhere nearby,” she reckons.

That snow leopards are shy is not news to Ang Maya. She is also aware of this endangered cat being listed as one of the species at the brink of disappearance.  “Snow leopards sometimes kill our cattle in the high alpine pastures,” she says. “I lost a few calves a couple of years ago”.  The inhabitants of Thamo previously had an average of 20 to 25 livestock per household.  Their primarily occupation was herding but many of them have now turned to alternative professions. “I owned 50 yak, naks (female yak), and cattle. But slowly, it became difficult to find herders. Atop the mountain, snow leopard would snatch away our animals.  People turned away from rearing livestock.” Maya is now a hotelier. Some of the villagers are also in the same business. Others are involved in vegetable farming, while still others run teashops. Almost 50 percent of community members have made trekking and tourism a source of their livelihoods.   “Tourism is good for us,” Maya says. “I also realize that when I tell tourists that we have the snow leopard around, they are so interested to know more about this cat.”

Villagers in Thamo today have understood the advantage of having snow leopard in their area. That is why she, along with 20 other enthusiastic locals from Thamo, have directed their energy towards conserving snow leopards for the past three years by establishing a Snow Leopard Savings and Credit group. “To save snow leopards we must conserve their prey and habitat,” asserts Ang Maya, the president of the group in Thamo.

In Ang Maya’s experience, after the establishment of the Savings and Credit Group, small monetary problems have been easily overcome. All of the members have used credit, which has earned an income for the group. According to the group’s secretary, Karma Gyaljen, this year alone there has been a net transaction of RS 350,000 (c. $3500). 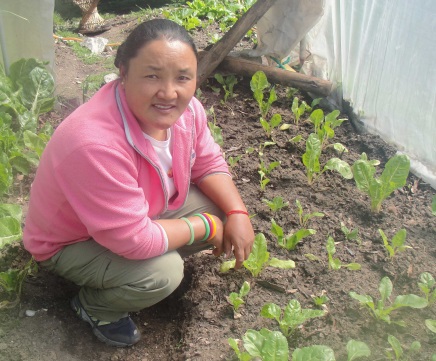 Ang Maya has used the loan she obtained from the group twice to buy the essentials for her hotel. “I saved RS 11,500. Being member of the Savings and Credit Group has been beneficial.”

Since the establishment of the Savings and Credit Group, Ang Maya explains that snow leopard– and not just the members – have benefitted. Snow Leopard Conservancy in partnership with Sagarmatha (Everest) National Park Buffer Zone Management Committee has established four saving and credit group in the region, including the one in Maya’s village of Thamo. Each of these groups contributes 15% of the annual profit to local snow leopard conservation fund. If any member’s livestock is lost to snow leopard, the conservation fund is used to provide partial compensation. “The group has decided to allocate RS 500 for calves and RS 1000 for adults,” says secretary Karma Gyaljen Sherpa. “This past year we received applications for two calves that were believed to have been killed and eaten by snow leopard.”

“As the income increases, the Trust grows bigger, and so does the amount given out as compensation,” Ang Maya points out. The group donates 10% of the net profit to local schools for conducting nature education and awareness programs, teaching children  about the importance of snow leopard and biodiversity. The local schools have been spending this money by conducting environmental debates, essay competitions, and playing snow leopard street dramas. “The conservation message is reaching doorsteps through these young students,” Ang Maya reminds us.