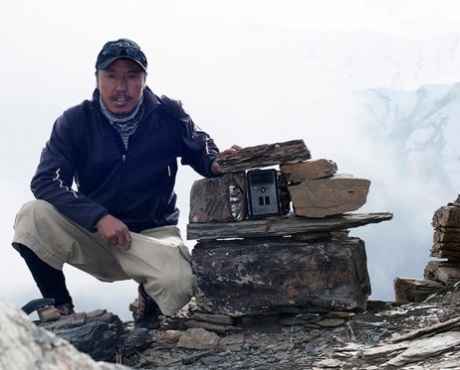 A hotel manager and photographer, Tashi R. Ghale, a local resident of Manang, has remarkable experience in snow leopard monitoring. A member of the Snow Leopard Scouts, he has captured on camera multiple images of beautiful snow leopards.  He has also seen the cats many times right in front of him.

In 2005, the world’s leading snow leopard expert, Dr. Rodney Jackson, and his wife, conservationist Darla Hillard, made a visit to Mustang in Annapurna. When Tashi heard the couple was in Jomsom (district headquarter of Mustang), he made a 2-day trek from Manang crossing the Thorong La high altitude Pass at 5416 m to meet them.

“Actually, I first met Darla in 2004, during a 12-day nature guide training,” Tashi recalls. Darla, who attended the training for three of the days, gave Tashi the idea of using camera traps to explore and monitor snow leopards in his village Manang.

Meeting with Rodney for only a few hours in Jomsom, Tashi learned how to operate a remote camera and identify snow leopard pugmarks. He received valuable information  from Rodney about how snow leopard maintains its territory, likely locations to find them and most importantly, where to place the remote-camera.

In 2006, Rodney sent a remote camera to Tashi in Manang, so he could install it for trial. “We didn’t have digital cameras at the time and it wasn’t as easy as it is now,” Tashi remarks. “We had to unload the film and take it to Kathmandu or Pokhara, the nearest sizable city, to know if the camera had caught anything.”

Luck turned out to be on Tashi’s side. A pair of snow leopards with a cub had been captured in Kerken pasture (3750 m). Similarly, two isolated snow leopards were captured on film at Gunchang. “There was no limit to my astonishment! I was extremely happy. I scanned the image and sent it to Darla immediately. Darla congratulated me.” That was the first camera trap evidence of snow leopards in Manang.

In 2008, Tashi placed camera traps once again but was not as lucky. “It was a matter of chance, so I was not disappointed.” As part of Snow Leopard Scouts project, he is now the main local expert to install and monitor several remote cameras in different high altitude pastures in Manang.  In 2012, two snow leopards were captured. Eleven cameras placed in various locations in 2013 managed to capture five snow leopards, including a mother, a young and a pair. The same year, a camera installed at Aangumilapche pastureland (4600 m) captured a rare species. “It turned out to be the rare Pallas’ cat,” Tashi exclaimed. “The Department of National Park and Wildlife Conservation is in the process of giving it official recognition.”
Tashi is an indispensible member of the Snow Leopard Scouts created by Snow Leopard Conservancy to support Annapurna Conservation Area Project for snow leopard monitoring. He fondly recounts his encounters with snow leopards with the younger Scouts and conducts informational sessions on snow leopard habitats at various environmental camps.

Today, many students in various schools in Manang district have heard about remote cameras being installed and monitored as part of the snow leopard conservation and monitoring program.  They are happy to know they may be involved in this endeavor if they have the interest to do so. “A young fellow studying in 9th grade at Annapurna Higher Secondary knows exactly how to operate cameras. Can you believe that?” Tashi proudly announces, “And he can also identify snow leopard pugmarks.  I am proud that we are citizen scientists.” 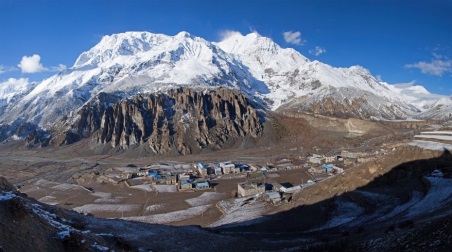