Youth of Baltistan – Laying the Path For Successful Conservation of Wildlife 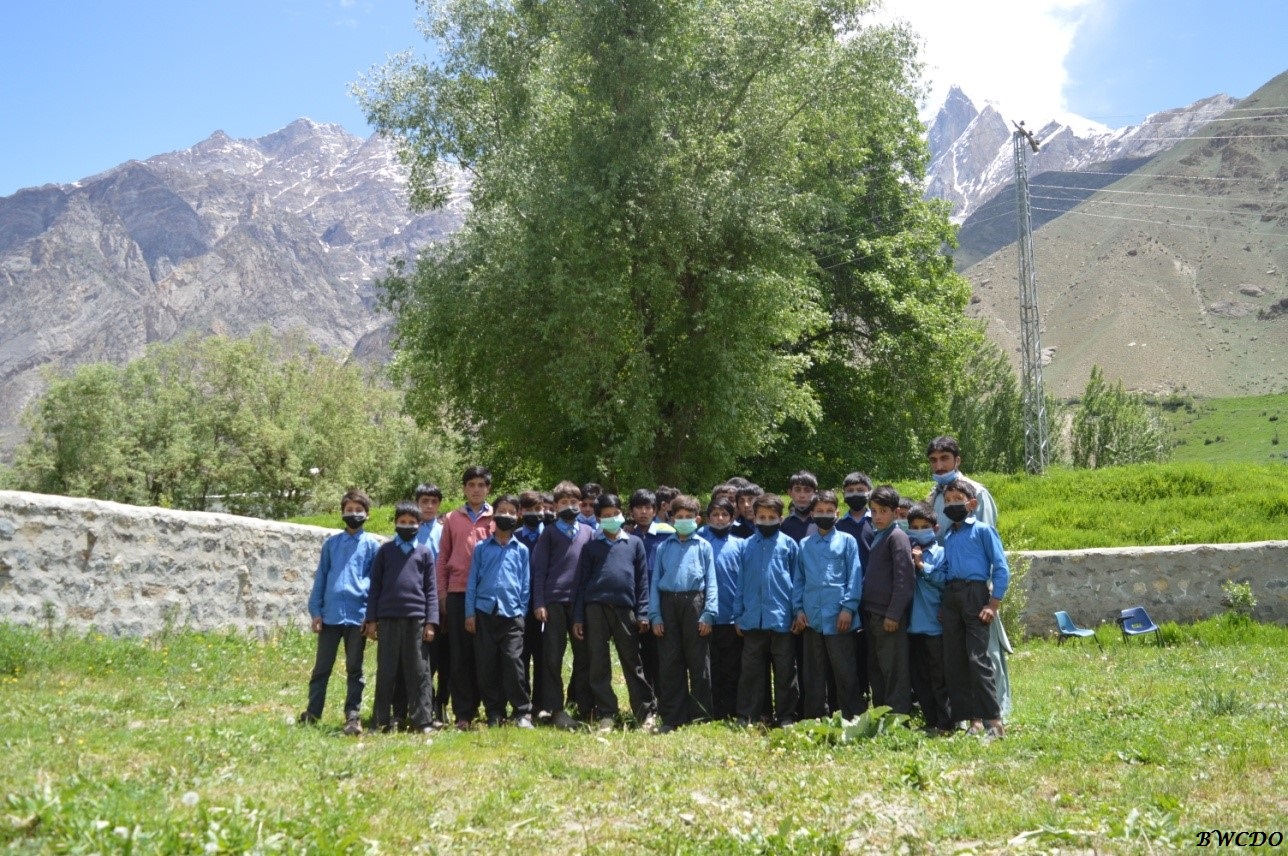 The Conservancy’s partner, the Baltistan Wildlife Conservation and Development Organization (BWCDO) works with local communities in Pakistan. Project Manager Ghulam Mohammad explains that the BWCDO’s methods are based on the belief that “sustainable and continuous conservation can only be possible when the community itself is motivated to do so.”

He goes on to tell us that “historically [their] project areas have seen hunting as a common custom. Now, despite the passing of laws which prohibit illegal hunting and the introduction of trophy hunting programs which benefit the community, it is difficult to change the mindset of elders. Although they cannot engage in hunting, it is another matter to get them on board with ideas of wildlife protection and conservation.”

In order to bring about a change in attitudes, Ghulam tells us that “the most successful method . . . is to engage the youngsters and schoolchildren who are not only fascinated by the wildlife present in their areas but are also very enthusiastic to take ownership of their habitats.”

He reports that “there is a clear difference in the level of engagement with the youth in comparison to the elders.” In addition, “the adults of a project area are often swayed and influenced by their children who learn at school about the presence and challenges faced by wildlife in the area.”

With this in mind, Ghulam says “the past few years have seen most of our efforts go [toward] conservation education. [Their] aim is to inform the students about the presence of different animals in their region while also enabling them to understand how they relate to [people] and the interworkings and codependence within the ecosystem.” 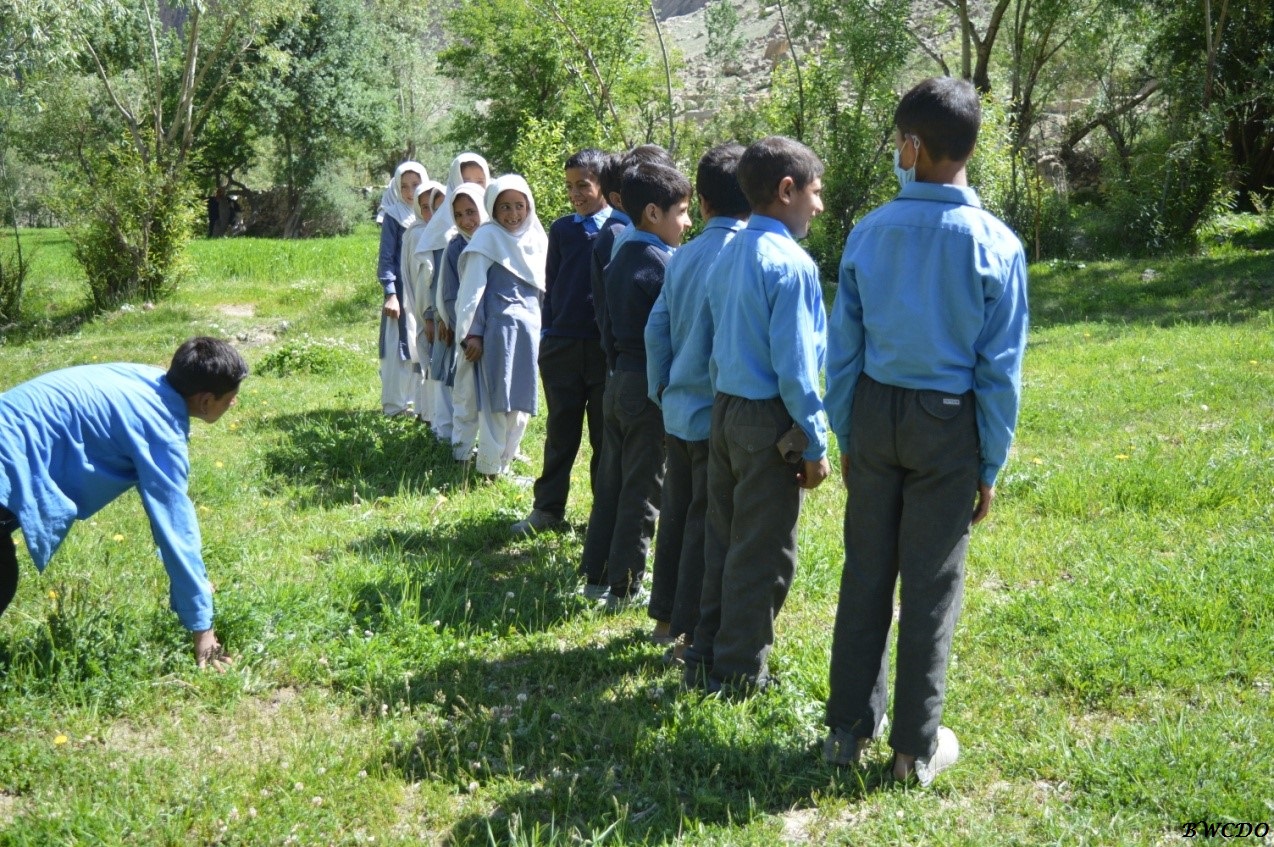 In 2021, students were involved in a variety of activities including taking part in a multimedia presentation given by BWCDO. As part of the presentation, the students were asked to describe the presence of wildlife in their area and the challenges they thought those animals face. Information presented explained the importance of protecting and maintaining the ecosystem they share with other animal species.

Additional activities included predator-prey and web-of-life games, which demonstrated how different species, including humans, relate to one another within an ecosystem while sharing the same habitat. 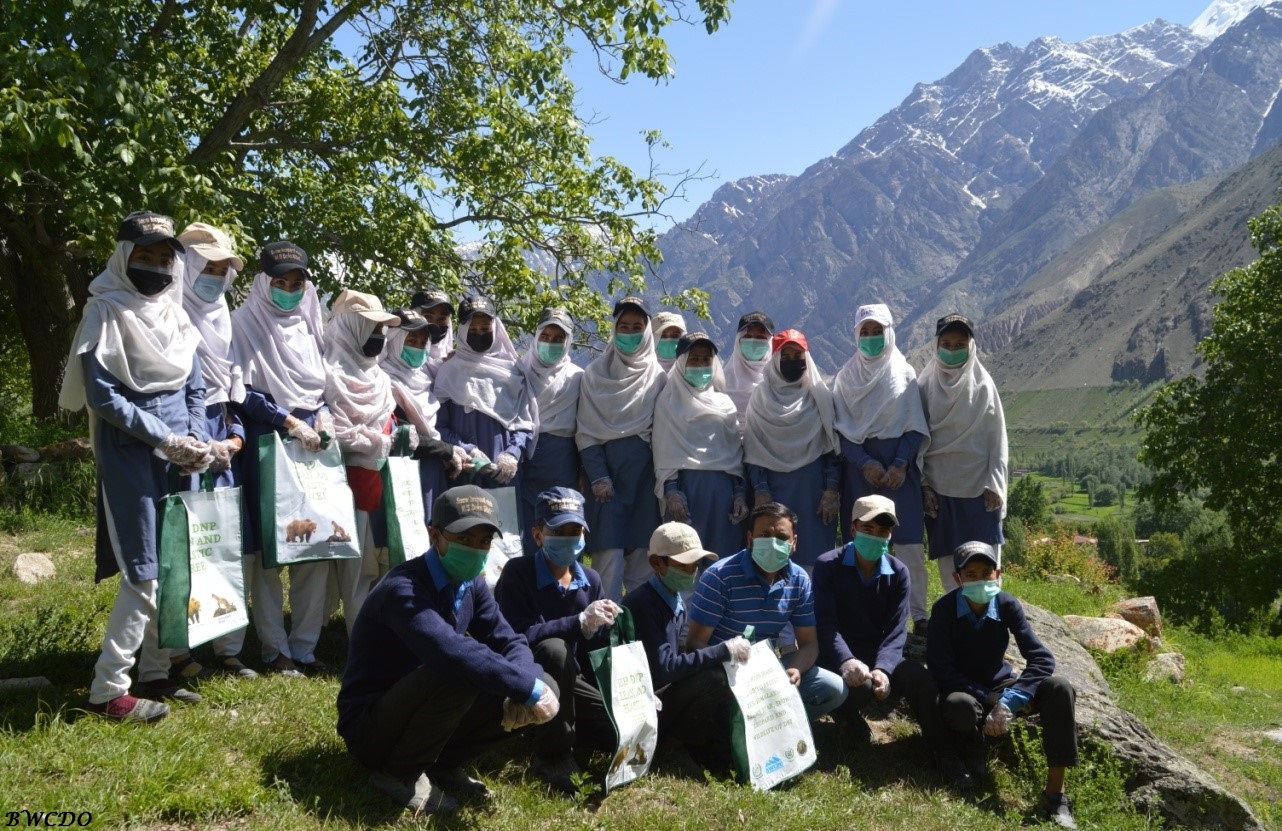 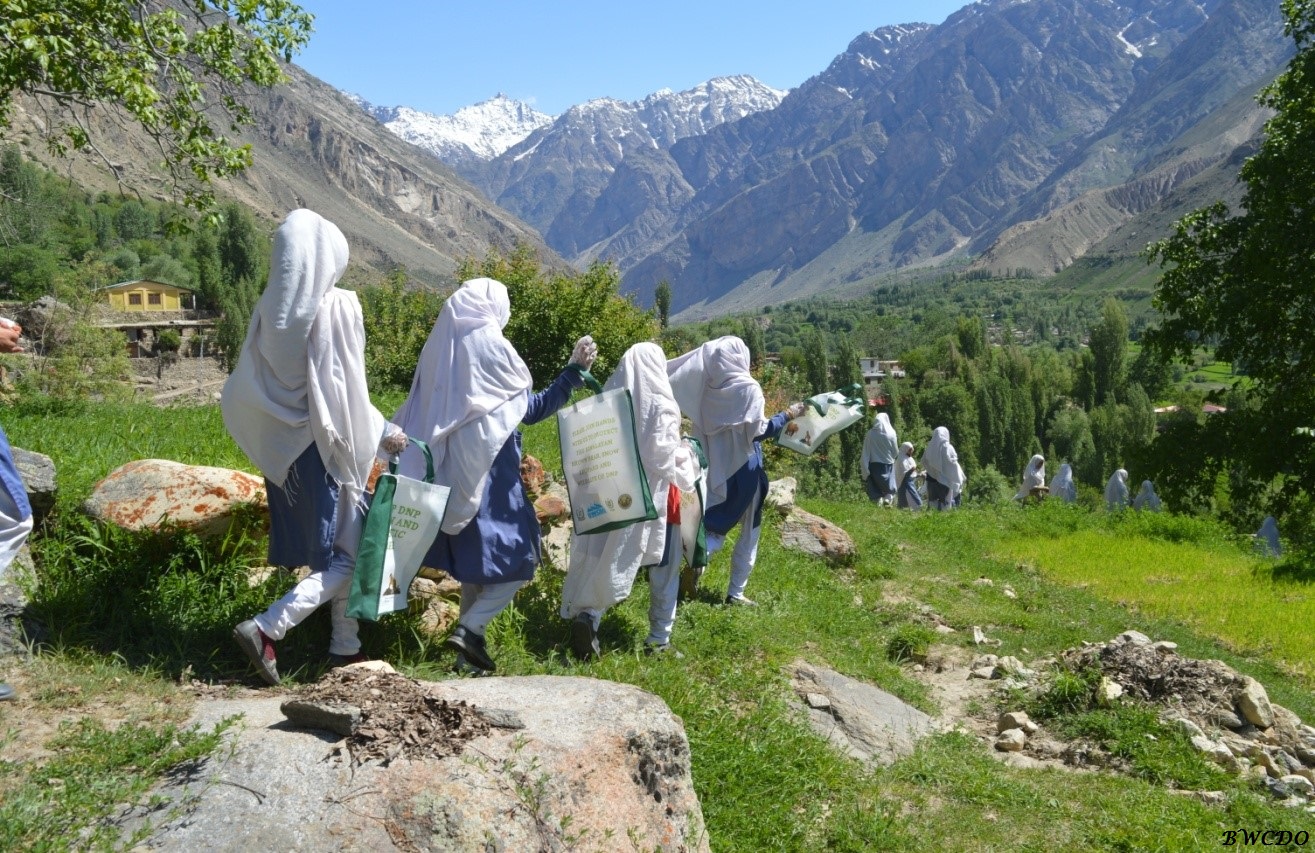 To actively engage the students, cleanup drives were conducted in several schools where children participated in the collection and disposal of trash.

Other than cleanup drives, students focused on recycling everyday objects such as plastic bottles which were converted into pots for plants.

To keep the students continuously engaged, Program Officer Raza Muhammad formed environmental and snow leopard clubs at different schools. These student-led clubs, which were supervised by their teachers, formulated activities that would engage the larger student body.

Conducting activities through these clubs gives a greater share of responsibility to the students who are also provided with an opportunity to plan and conduct events that are of interest to them.

Students planned and held a celebration for World Environment Day. BWCDO assisted the students by providing banners and stationary. 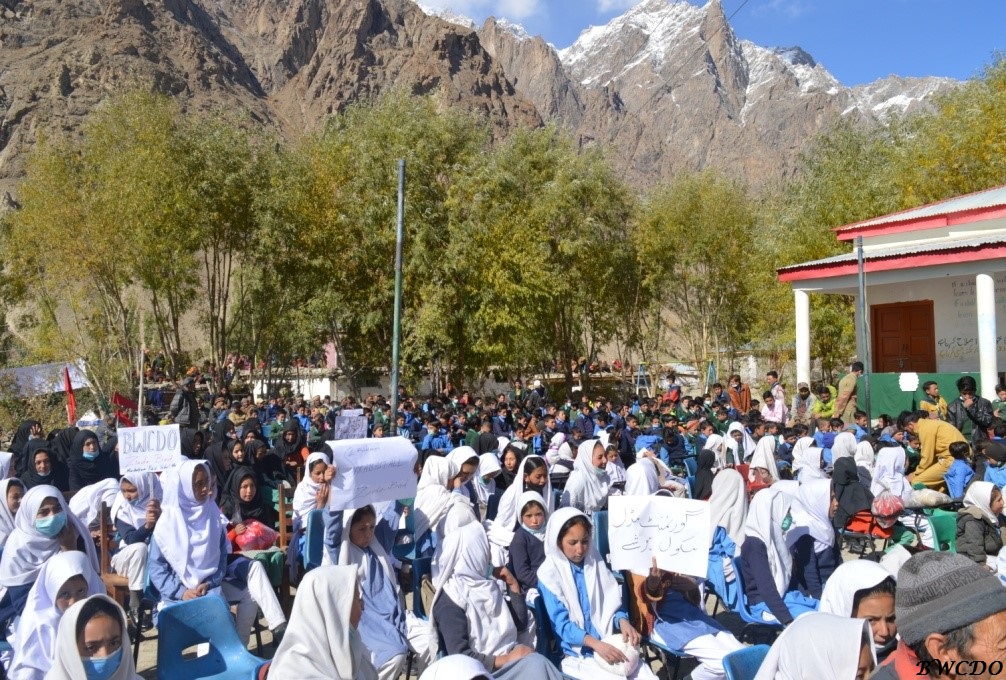 The children of Basha Valley, Pakistan, inspired members of the local community when International Snow Leopard Day was celebrated at Middle School Basha Shigar. The event was organized by BWCDO in collaboration with Iqra Fund, an NGO that has been the pioneer of girls’ education in Basha since 2011. The coming together of Iqra Fund and BWCDO has resulted in remarkable results for the valley.

Evidence of conservation education being a very effective and sustainable method of protecting wildlife and habitats and improving the lives of locals was seen at the event, which included a speech competition between the students of different schools, an arts competition, and a quiz which focused on conservation and history of the region.

The Minister of Education, Gilgit-Baltistan, Raja Muhammad Azam Khan, congratulated and praised the work done by BWCDO, which produced a successful model of education, conservation, and community engagement most importantly through the custodians of the future – the children of Basha. This model of giving to the community through education has enabled humans and wildlife to exist in harmony.

Seeing the remarkable efforts done over the years and the motivation of the children and elders alike, Forest Conservator, Gilgit-Baltistan, Mehmood Ghaznavi promised to make the Valley of Basha an officially protected area, which would grant the community incentives, opportunities, and rewards for their already existing culture of wildlife protection.

The confident speeches of girls and boys were not only full of passion but also exhibited their ownership of the region and its natural gifts. Up until a decade ago, the notion of educating girls in the valley did not exist, and opportunities for boys were scarce too. Now, the community, itself, seeks and demands opportunities for college level education where once primary schools were not even functional. What has resulted is the coming together of conservation and education, which has forced the community to take hold of their own fates. In an area where historically the hunting of wildlife was customary, now its children are seen as champions of conservation. 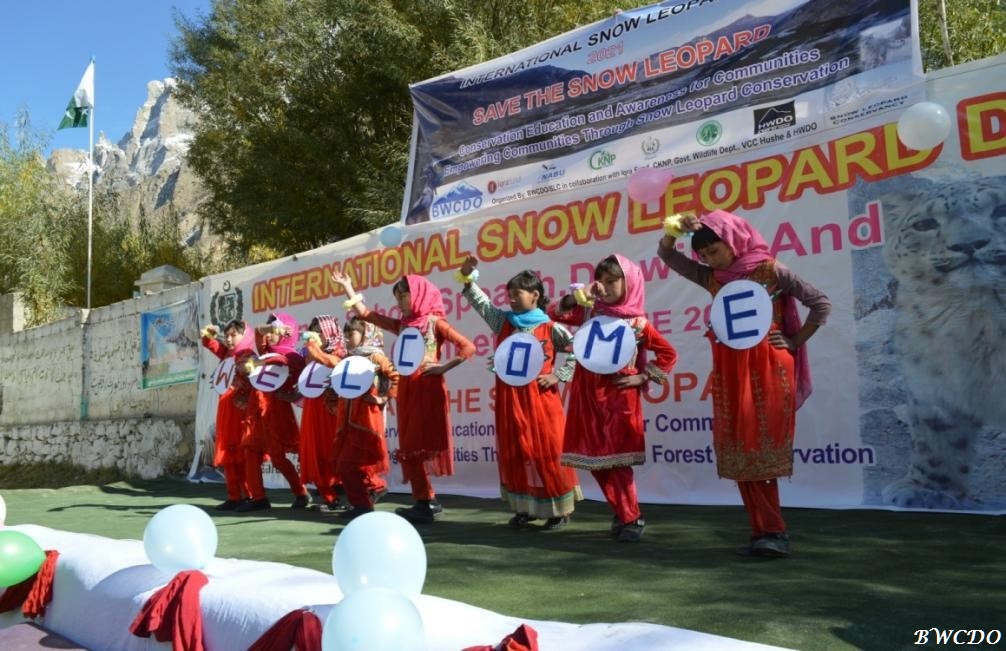 Students of three different schools participated in oral, written, and art competitions. Through the outstanding efforts of teachers and parents, alike, everyone from youth to elders of the village participated in the event, making it a historic day.

The objective of the celebration was to create awareness about protecting the snow leopard. The theme of the event was “Join Snow Leopard Conservation; Protect the planet that we share” – an appropriate theme given the variety of organizations that came together under the leadership of the children whose passion inspired everyone.

The Hushe community has shown great resilience over the years in the protection of the habitat and wildlife found in the region. BWCDO began its work there in 2007, and with the enthusiasm and hard work of the VCC, the snow leopard population has not only been protected but is thriving. Over the past 15 years of BWCDO’s presence, much of the focus has been on conservation education and engagement with the youth. With young people spear heading the VCC and rallying the cause of the snow leopard’s protection, the big cat is no longer seen as a threat but as an asset to the community.