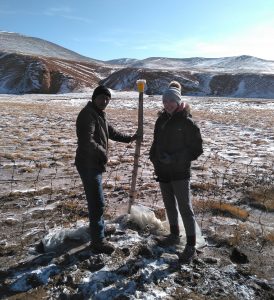 Charlotte Hacker, a PhD candidate at Duquesne University, is currently based in China working with the Snow Leopard Conservancy, the Chinese Academy of Forestry, and other in-country partners to better understand the snow leopard’s diet, including documenting its dependence on livestock. She is also working to find appropriate solutions for such human-wildlife conflict. Currently, she and her team are testing the use of Foxlights computerized flashing lights as a deterrent to better protect livestock from predators. They are also studying the use of guard dogs.

From Charlotte, we learned “Guard dogs are commonly kept on the Tibetan Plateau as a means to deter snow leopards from predating on livestock, but research on how effective guard dogs are at accomplishing this task or their impacts on local ecosystems in High Asia is lacking.” She tells us, “We’re finding through our work with local communities that while some herders consider dogs to be important for keeping snow leopards from attacking livestock, others are concerned that the two animals are habituating to each other. Sightings of casual encounters between dogs and snow leopards are becoming more and more common as wild animals cease to associate negative outcomes (chase, injury, etc.) with the domestic dogs themselves.” 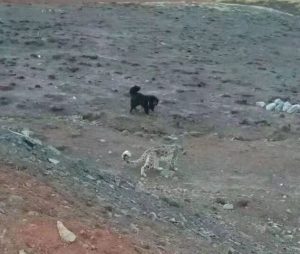 Conservationists working with cheetahs in Namibia have had a great deal of success with the utilization of guard dogs to ward off attacks on domestic flocks. This can be traced to cheetahs being diurnal predators and to the dogs being well trained, fed, and tended. The situation in the Himalaya’s is much more haphazard. Unlike cheetahs, snow leopards hunt by night rather than by day. In India, herders’ dogs have been implicated with killing prey species possibly bcause they are not well fed by their owners. Before we can make any recommendations for the use of guard dogs, we need to be sure there are no unforeseen consequences. Thus, Charlotte is investing how guard dogs and wildlife interact within her project study area.

She reports, “herder dog ownership” in the area in China where she is based “is typically loose and informal. Veterinary services, including vaccinations, are not regularly provided, and a lack of spaying or neutering has led to an increase in the dog population, both feral and otherwise.”

Charlotte notes, “The breeds available for protecting livestock on the Tibetan Plateau are likely limited by their ability to survive at high altitudes.” She cites the following interview.

One herder we interviewed was actively training dogs of a shepherd breed used specifically for livestock guarding. We got to interact with the dogs, and they were very well trained, but the breed does not do well at high altitudes. His male and female have had 19 puppies total over the last 2 years, only 2 of which have survived.

Charlotte says, “Guard dogs rarely receive formal training for protecting livestock. The lack of training may ultimately lead to ineffectiveness though some herders claim that the mere presence and vocalization of dogs is enough to ward off predators.

“Regardless, a continued lack of negative outcomes to predators linked to dogs may result in habituation whereby predators no longer view dogs as a threat. Habituation can undermine human-wildlife conflict mitigation strategies and is a consideration in implementing and testing other deterrents such as Foxlights.”

Notably, guard dogs have been used successfully to protect livestock from predation in other locations around the world, but what works in one place may not work in another given the many mitigating factors that affect their efficacy. In addition to access to formal training and veterinary care, there are also the considerations of availability, affordability, and suitability to the environment of the dogs, themselves. Therefore, the implementation of intermittent deterrents like Foxlights may be a good alternative to the use of guard dogs in this region. 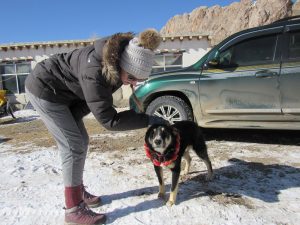 We look forward to receiving further updates from the field from our Associate, Charlotte Hacker, as well as others working in Mongolia, Nepal, and India.