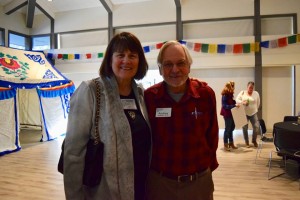 Three of our LOSL members, Maria Azhunova, Alexander Khamaganov, and Rinchin Garmaev, traveled to San Francisco from the Southern Siberian Buryat Republic. Snow leopards are a totem animal and protector of the people who live in this region. 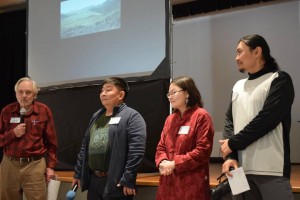 Our guest speakers presented a beautiful video about their work within the LOSL Network, and they described the importance of Indigenous Cultural Practitioners (Elders, Shamans, Sacred Site Guardians) in promoting conservation. 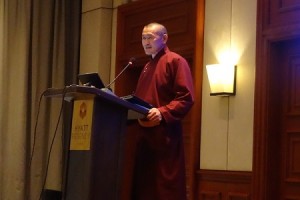 One such practitioner featured in the video is Norbu Lama. He successfully worked to gain official protected status for a sacred site in the Buryat Republic. Norbu, who is a beloved community leader, is present at births, marriages, funerals, and other milestones, and his teachings are respected and heeded. When he visits a school, the children pay attention to what he says about the need to protect snow leopards and to revive the ancient traditional practices that revere and conserve nature. 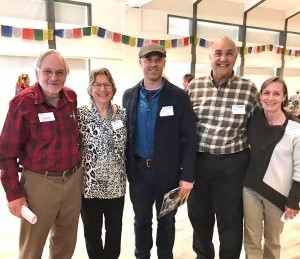 Guests at the event said how inspired and moved they were by the presentation. Thank you, Maria, Alexander, and Rinchin, for making the afternoon such a wonderful success!

Photographs of the event are courtesy of Kathy Gervais and Susan Janin. Featured photo courtesy of Peter Bolliger