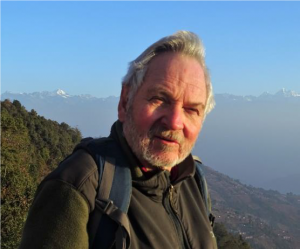 The Indianapolis Prize was created in 2006 to recognize best-in-class conservation solutions, bring innovative ideas to scale and reward the conservation heroes who have achieved major victories in saving species from extinction.

“The Indianapolis Prize is unique for the visibility and resources it brings to wildlife conservation,” said Dr. Jackson. “Receiving the Prize would help me secure the sustainability of the Snow Leopard Conservancy while devoting my time to mentoring the next generation of passionate snow leopard conservationists. These young men and women inhabit my dream of a future where snow leopards flourish throughout Asia’s high mountains. The Indianapolis Prize would help me realize that dream.”

The 2018 Indianapolis Prize Finalists include:

Joel Berger, Ph.D. (Colorado State University; Wildlife Conservation Society) — Distinguished scientist leading projects examining the effects of climate change on musk ox in the Alaskan Arctic, the impacts of energy development on wildlife in Greater Yellowstone, the threat of large carnivores on the conservation of endangered species such as Andean deer (huemul), the development of pronghorn antelope migration corridors, and saiga antelope conservation in Mongolia. Finalist for the 2014 and 2016 Indianapolis Prize.

P. Dee Boersma, Ph.D. (University of Washington; Center for Ecosystem Sentinels) — Conservationist dedicated to the study of global warming’s impact on penguins; successful in stopping both harvesting and the development of oil tanker lanes through penguin colonies.

Rodney Jackson, Ph.D. (Snow Leopard Conservancy) —  Conducted first radio-tracking study of snow leopards in the 1980s; leader in engaging communities as co-equals in successful conservation strategies; collaborator in a range-wide genetic study that revealed the likelihood of three subspecies of snow leopards, contributed to their reclassification from endangered to vulnerable, and continues to create innovative conservation solutions across large portions of the species’ vast geographic range. Finalist for the 2008, 2010, 2012, and 2016 Indianapolis Prize.

Russell Mittermeier, Ph.D. (Global Wildlife Conservation) — Visionary leader able to motivate every level of conservation to support the greater good of many species, including saki and muriqui monkeys and other neotropical primates; one of the first academic primatologists to become concerned with the welfare and conservation of primates. Finalist for the 2012 and 2014 Indianapolis Prize.

At a time in which animals are going extinct at a rate not seen since the era of dinosaurs, a 2018 Atomik Research survey* finds that 9 in 10 Americans believe the government (federal and state) should do more to promote policies that protect endangered animals, and when give the definition of an animal conservationist, 83 percent of Americans say animal conservationists qualify as heroes.

“[The Indianapolis Prize] brings the most incredible people together to talk about their work and give us a message about where to go from here,” said Sigourney Weaver, actor and 2016 Jane Alexander Global Wildlife Ambassador, a title administered by the Indianapolis Prize to honor public figures who have been effective voices for wildlife conservation.

The 2018 Indianapolis Prize Jury, comprised of distinguished scientists and conservation leaders, will determine the Winner of the 2018 Indianapolis Prize, its $250,000 cash award and the Lilly Medal, an original work of art that signifies the Winner’s contributions to saving some of the world’s most threatened animals. Each of the five Finalists will receive $10,000.

“Winning the Indianapolis Prize gave my organizations a much bigger platform from which we could reach people with our conservation message,” said 2016 Prize Winner Dr. Carl Jones, chief scientist of the Durrell Wildlife Conservation Trust and scientific director the Mauritian Wildlife Foundation. “The field of animal conservation is fortunate to have an award that recognizes and celebrates individuals who have dedicated their life’s work to understanding biodiversity and protecting the species on which entire ecosystems depend.”

The Indianapolis Prize was first awarded in 2006 to Dr. George Archibald, the co-founder of the International Crane Foundation. The 2008 Winner was George Schaller, Ph.D., known as one of the founding fathers of wildlife conservation, and both a senior conservationist for the Wildlife Conservation Society and vice president for Panthera. In 2010, Iain Douglas Hamilton, Ph.D., founder of Save the Elephants, received the Prize for his pioneering research in elephant social behavior and for leading the way in the fight against the poaching of African elephants. Steven Amstrup, Ph.D., chief scientist for Polar Bears International, received the 2012 Prize for his work promoting the cause of the world’s largest land carnivore. In 2014, Dr. Patricia C. Wright, founder of Centre ValBio, became the first woman awarded the Indianapolis Prize for her dedication to saving Madagascar’s famed lemurs from extinction. Last year, Dr. Carl Jones received the 2016 Indianapolis Prize for his species recovery success on the island of Mauritius, including the echo parakeet, pink pigeon and Mauritius kestrel.

The Indianapolis Prize recognizes and rewards conservationists who have achieved major victories in advancing the sustainability of an animal species or group of species. Winners receive the Lilly Medal and an unrestricted $250,000 award. Remaining Finalists each receive $10,000. The Indianapolis Prize has received support from the Eli Lilly and Company Foundation since its inception.