Storytelling – A Means To Promote Coexistence With Wildlife 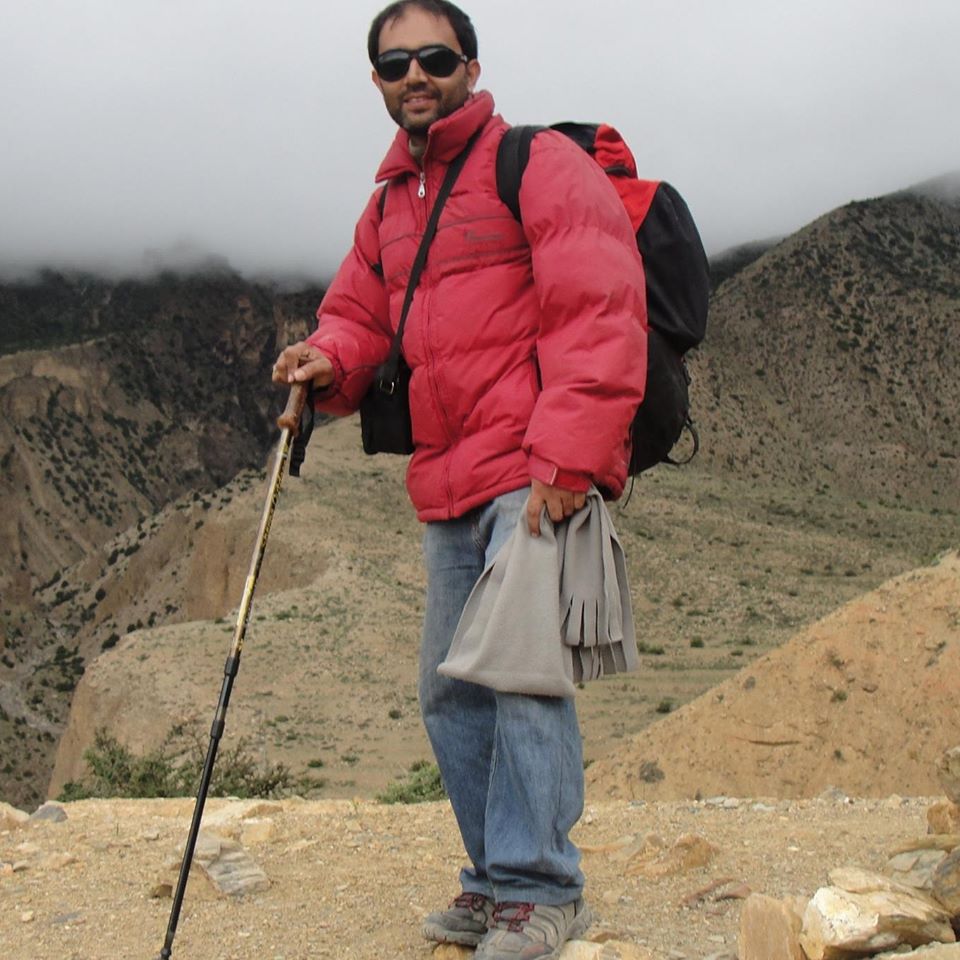 Anil Adhikari, a native of Nepal, has had the unique opportunity to combine his passion for writing and his love of nature and transform them into a profession. As a writer who got his start after college writing for television, he’s also a published novelist and has written textbooks on biodiversity and sustainable livelihoods on behalf of the World Wildlife Fund. Currently, he is one of the editors of the Snow Leopard Magazine, published in partnership with the Snow Leopard Conservancy. 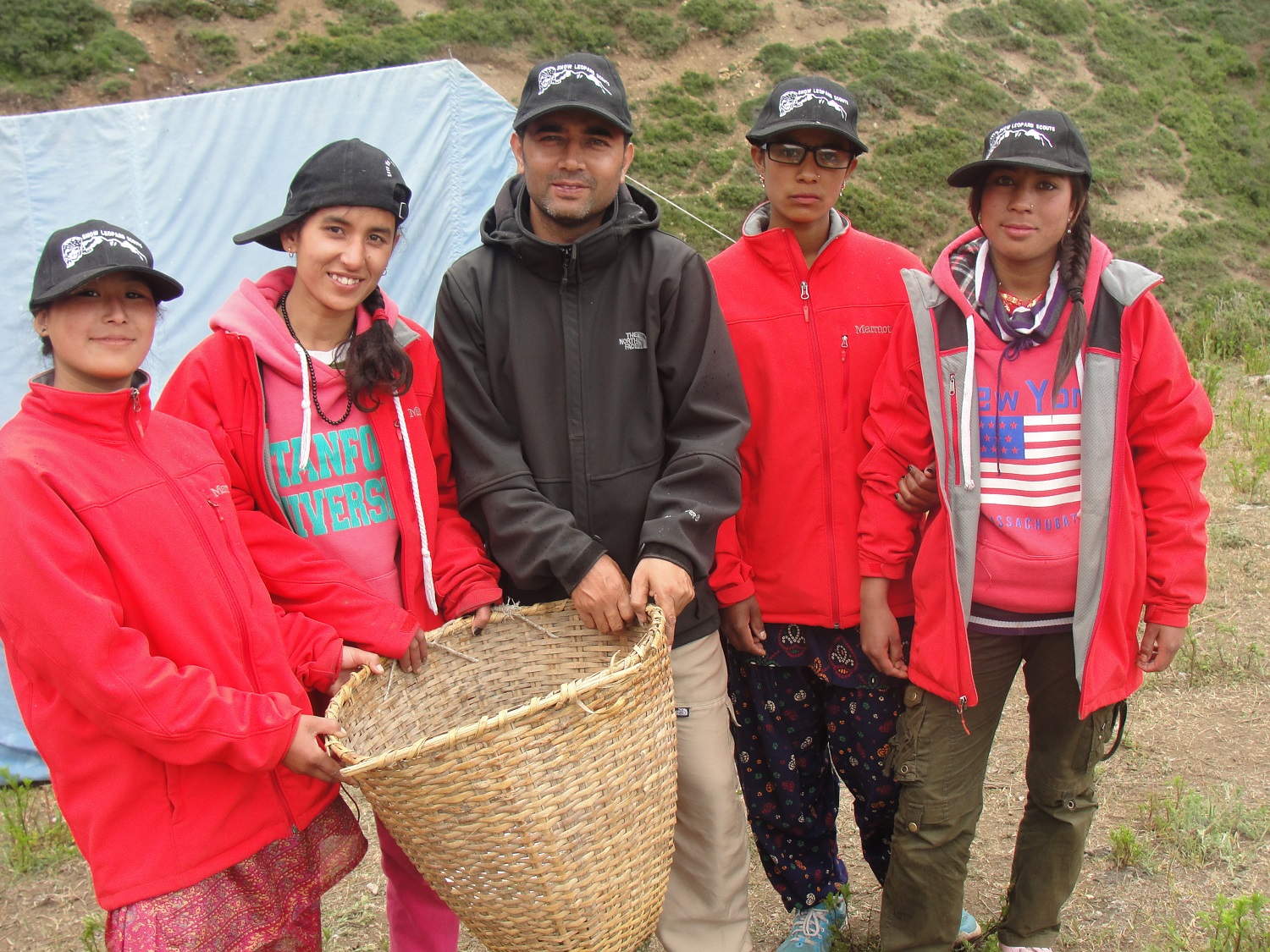 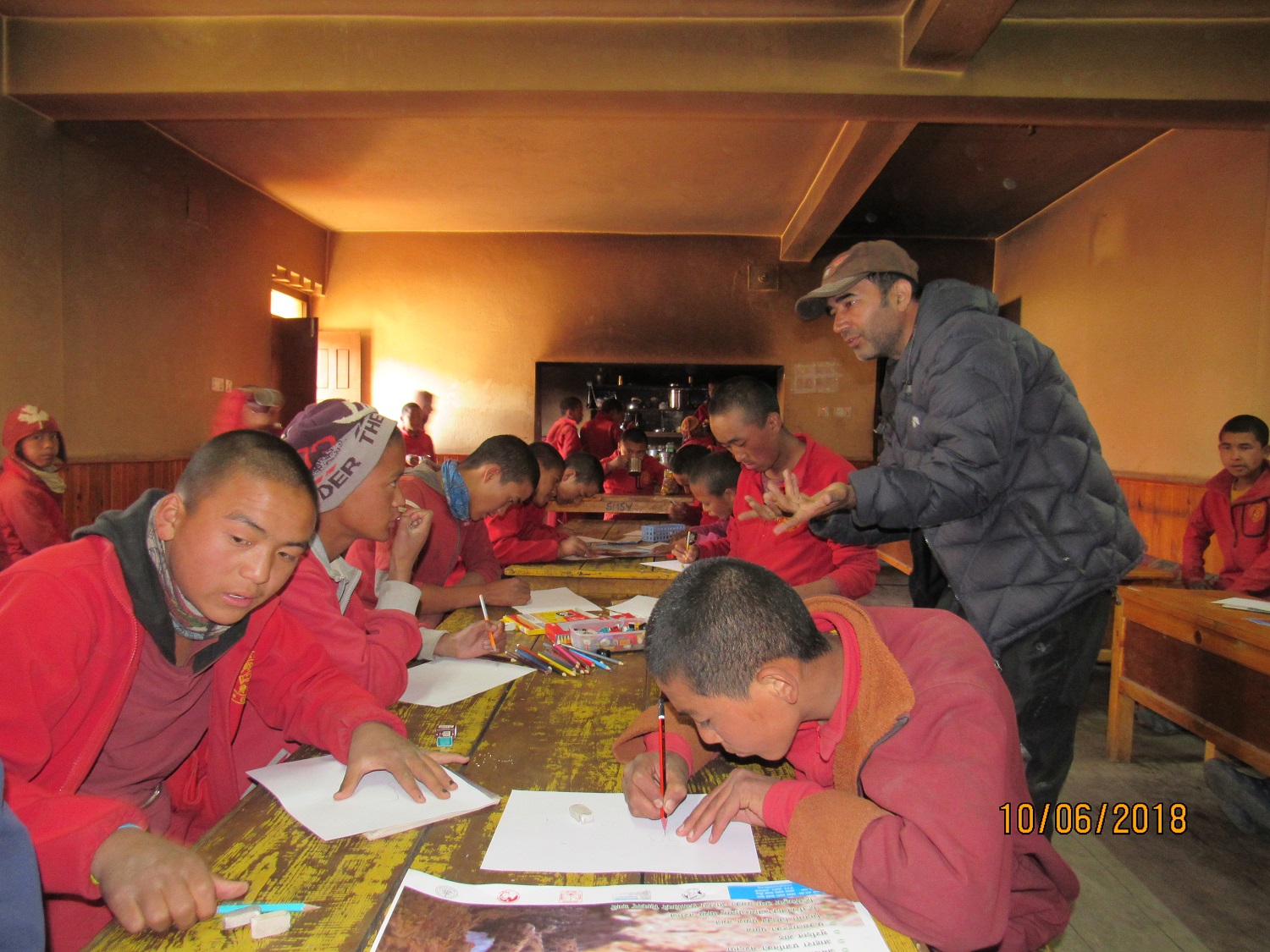 Adhikari’s contribution to conservation extends to working directly with local communities. He participates in the Snow Leopard Scout trail camera monitoring program, acts as a facilitator for women-run credit and savings programs, works with local herders, and on occasion speaks to local high school-age children. He’s also been writing two reference texts for intermediate school-age children on the conservation of snow leopards, focusing on the coexistence of humans and wildlife. 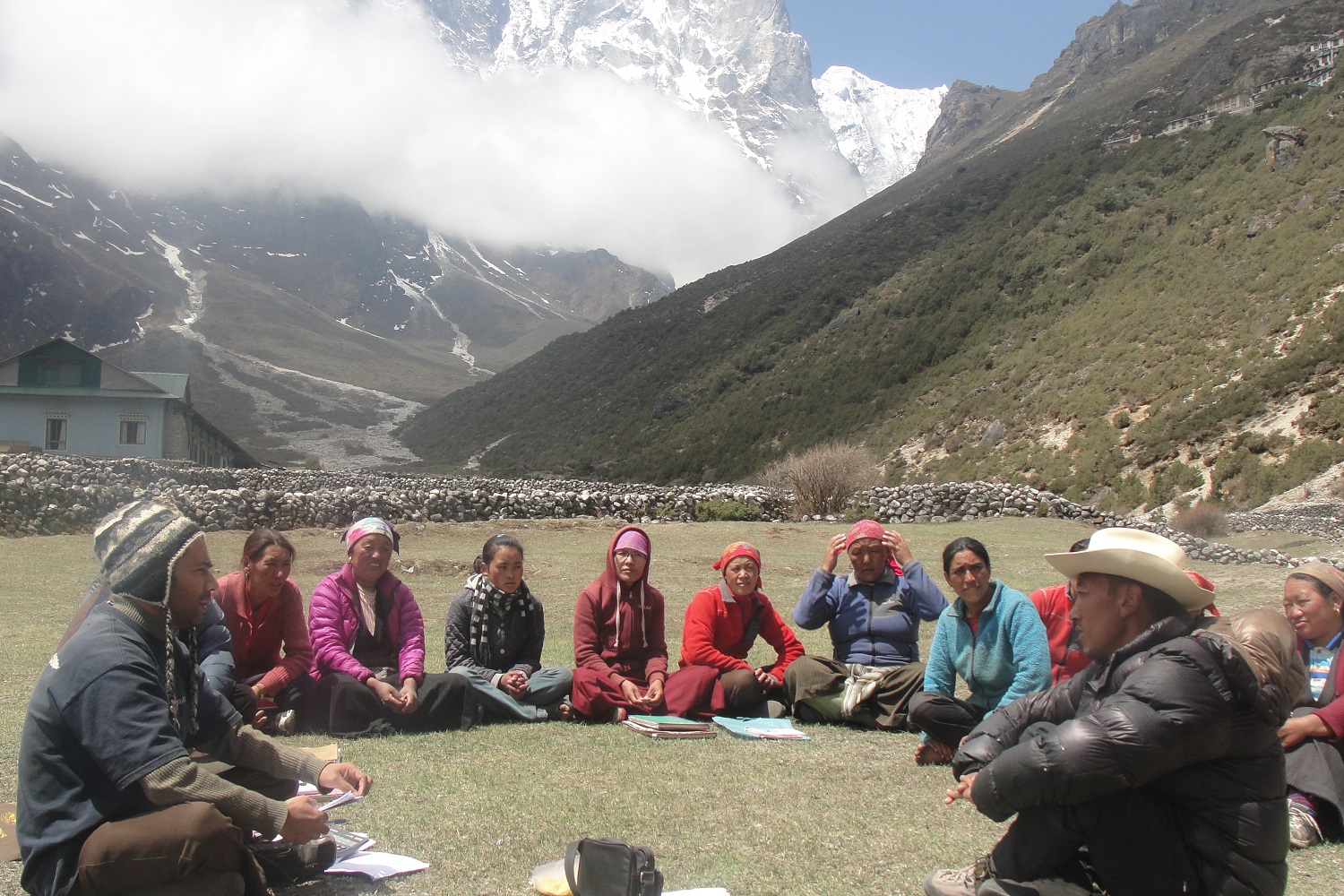 Predation by snow leopards on livestock poses a threat to both the survival of snow leopards and to the livelihoods of local community members. Negative attitudes and behavior towards predators like the snow leopard are also impacted by a lack of awareness and education, says Adhikari. It’s been his goal to bring about a positive change in the human wildlife relationship, and he has found that through storytelling, this can be achieved. 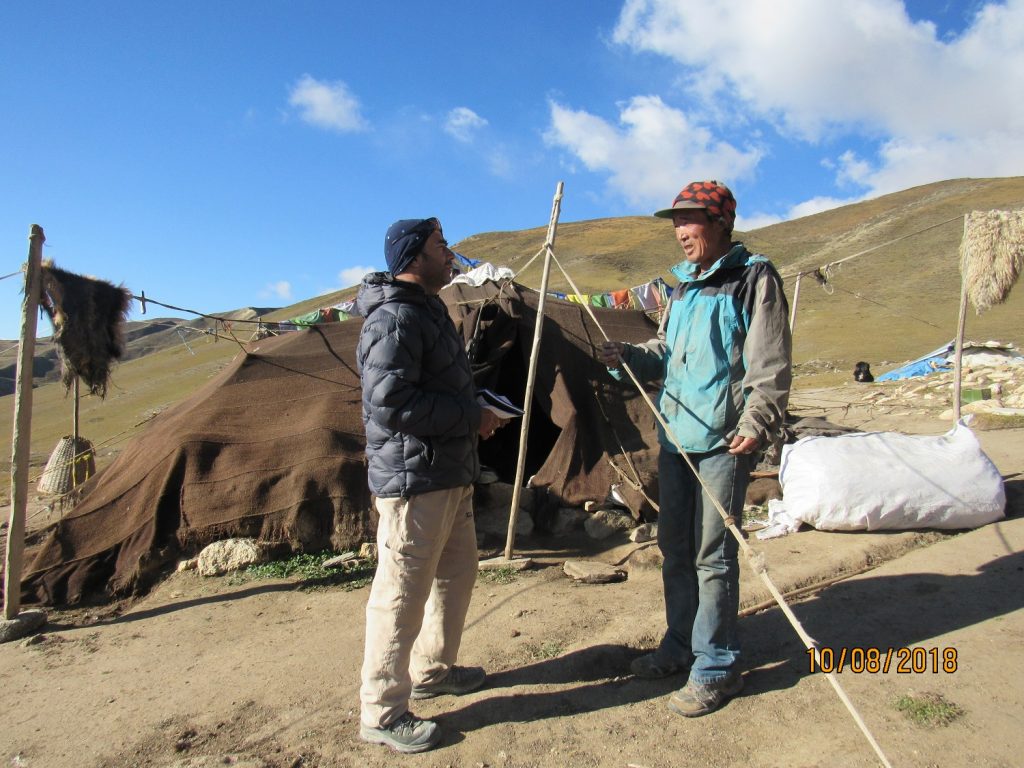 “Storytelling in my experience is the influential means to promote coexistence with wildlife. Its approach is broader and more interesting than any project reports. Rural communities are users of natural resources. They are not only the witnesses but the keepers of a broad knowledge of wildlife behaviors and mobility. Both humans and wildlife share the same habitat. Pasturelands are used by the local livestock herders which are the prime habitat of natural predators and prey species. This trend has been practiced generation to generation – the coexistence between human and wildlife being suitably applied. 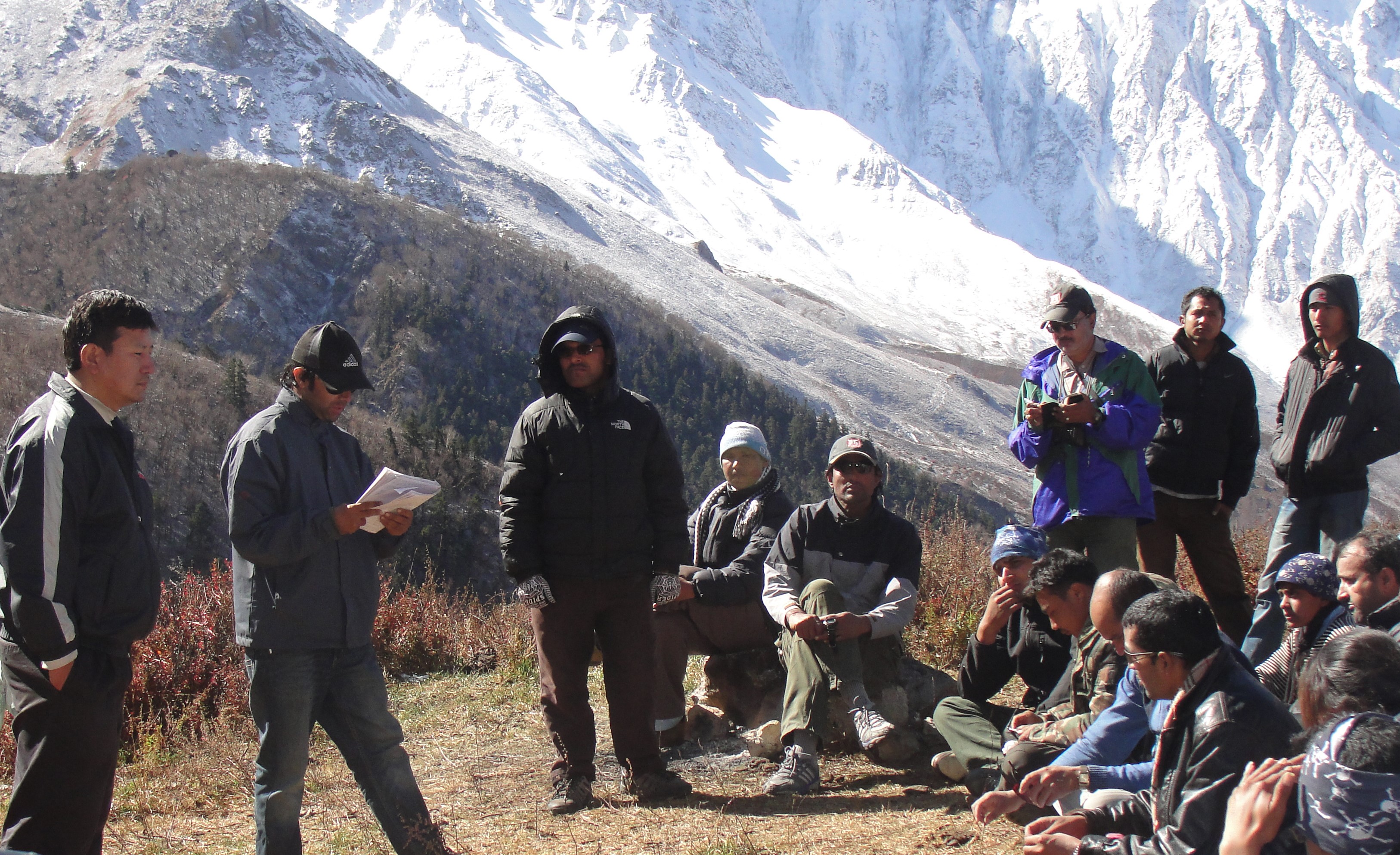 “I would like to share an example of a story of coexistence. Bhim Prasad Thakali of Mustang is the local herder. Even though he loses numbers of his livestock annually by snow leopards, he thinks that the snow leopard’s existence on this earth has purpose and killing livestock is its requirement. He doesn’t seem angry and keeps a positive attitude towards the snow leopard.

“Another extraordinary example happened in Manang village of Upper Mustang where Pema Wangchuk lost 107 sheep and goats. Hindu’s greatest festival Dashain was near where he had plans to sell the livestock. A snow leopard came to his village corral and killed the livestock in two nights. He had to bear the loss of 1.5 million rupees that heavily affected his family’s livelihood. The interesting thing was Wangchuk and his family never harbored any retaliatory feelings toward the snow leopard partly because of conservation education and awareness and being Buddhists too; they consider snow leopards as pets of local deities.

“People have started to learn the significance of this magnificent cat so that they are living in harmony and respect. I have documented and disseminated examples such as these of positive attitudes and behaviors towards coexistence in communities through stories and promoted them so that many people have the chance to learn from best practices.”

During the pandemic, Adhikari has been able to continue his conservation work although not in the field. He took a moment to describe the work he has been doing.

“I have been leading Teka Samuha Nepal, a NGO that explores funding possibilities and carries out conservation-based research and training initiatives. Currently, it has been collaborating with the Snow Leopard Conservancy to publish snow leopard-based IEC (information, education, communication) materials.” 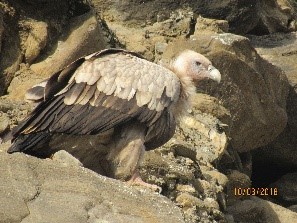 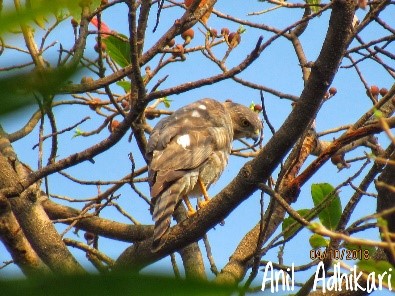 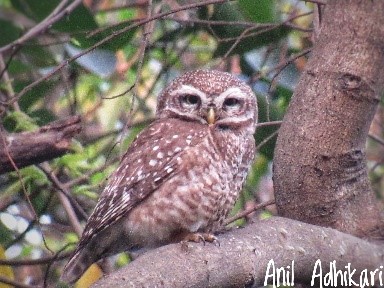 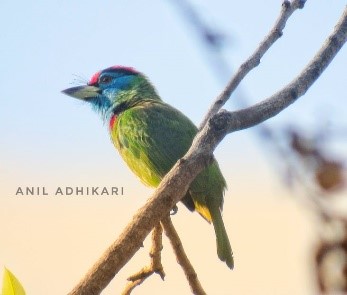 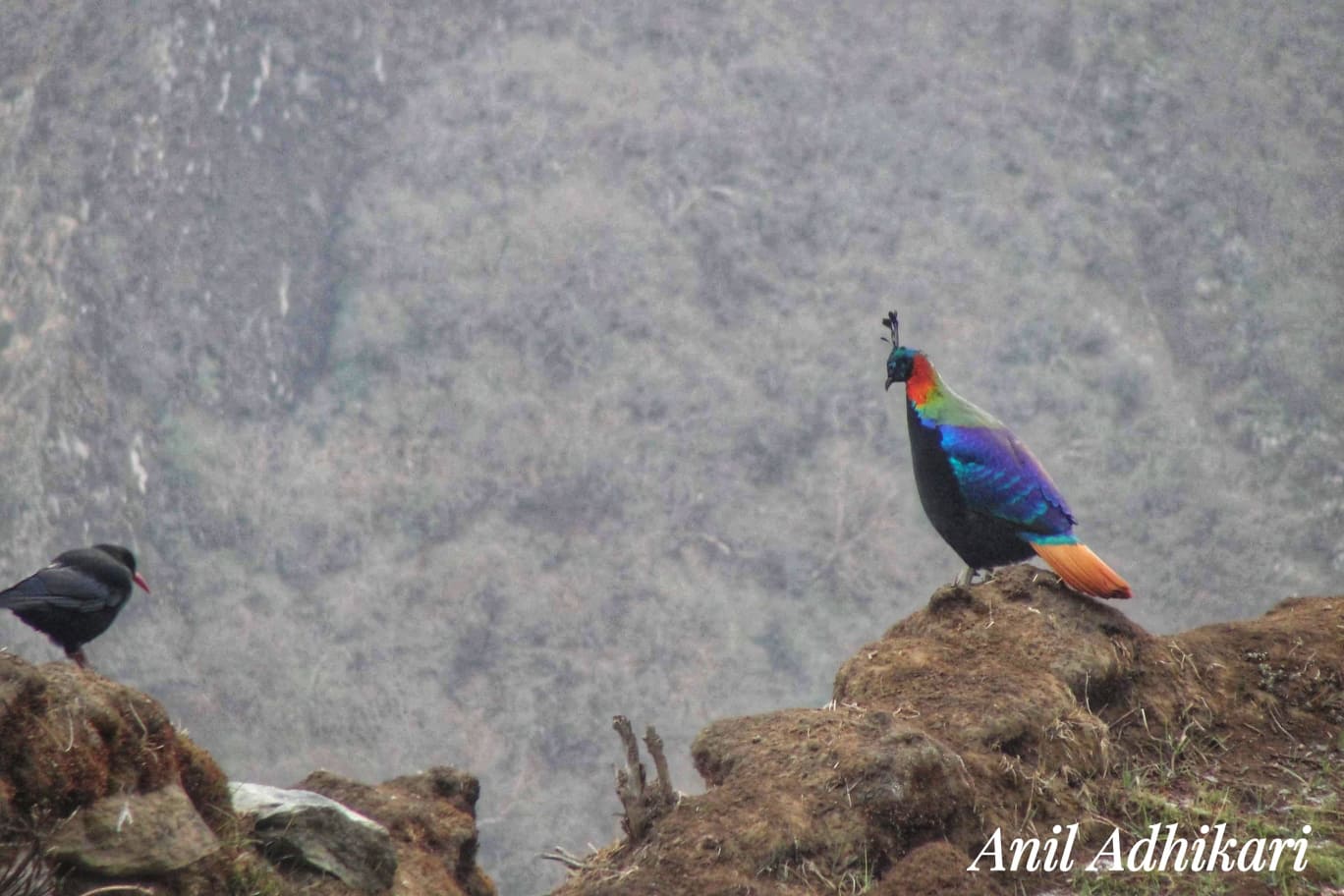 Adhikari has also been utilizing this time to publish photographs he has taken of birds and wild animals during trips into the field associated with snow leopard conservation initiatives in addition to photos taken of birds seen locally. He tells us “They are being published by bird and wildlife-related organizations such as Bird Conservation Nepal, Pokhara Bird Society, and Voice of Nature.” Also included in his published works are photographs of prey species of the snow leopard such as the Himalayan monal, Himalayan tahr, musk deer, blue sheep and other species. “Documentation and record keeping is very important for writing and publishing,” he explains. “There is a saying that a photograph is worth 1000 words. So, I always keep myself active in capturing the objects while I am in the field.” 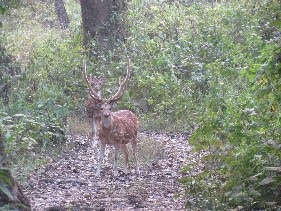 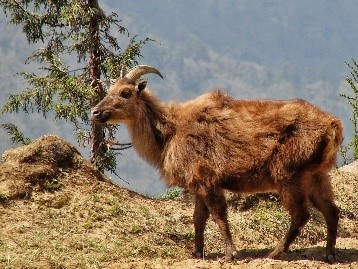 Adhikari relates that he has had the opportunity to read several excellent wildlife books which have provided insight into wildlife research and behavior and the coexistence of humans and wildlife. One book in particular that he read was the “The Snow Leopard.” He describes it as “a travel exploration written by the American best-selling writer Peter Matthiessen who joined George Schaller, world-renowned wildlife biologist, on a trip to Nepal’s remote Upper Dolpo region to study Himalayan blue sheep. However, his hidden interest was to see the snow leopard although at the end of the journey, the author was not lucky to have seen the elusive cat. ‘The Snow Leopard’ gave me insight of how Dolpo had been explored from the perspective of wildlife and tourism.”

He goes on to say “I have also been completing the writing and editing of books and magazines in association with the Snow Leopard Conservancy. To accomplish these works, I have been continuously communicating and coordinating with the field staff of various protected areas to explore facts such as; wildlife fatalities from natural disasters, the human – snow leopard conflict situation and mitigation measures applied in the field, best practices of livestock insurance schemes of Mongolia to conserve the snow leopard, and the feasibility of livestock insurance in Nepal’s Himalaya. The books are targeted toward the students of snow leopard habitat range in Nepal and aim to familiarize them with several conservation-related issues, mainly of the snow leopard’s prey and habitat. The important feature of the books is the documentation of stories of those who have devoted their lives to the snow leopard and its research and conservation, which gives great inspiration and lessons learned to a new generation.” 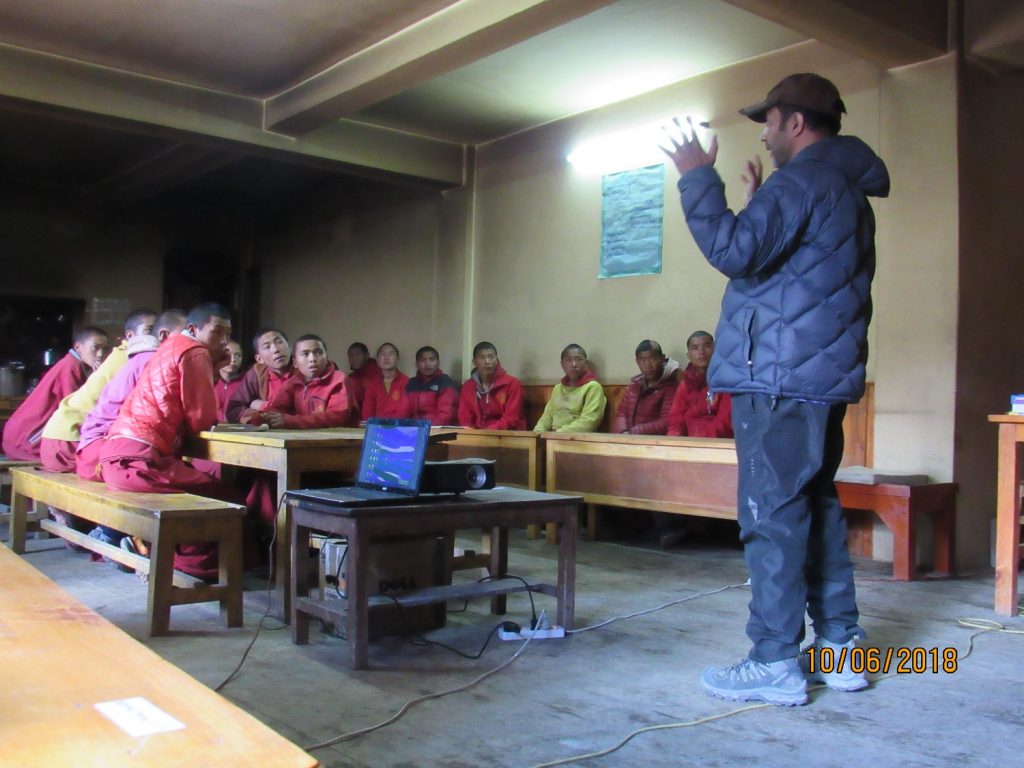 Orientation of lama students on snow leopard conservation at Lomanthang

While most of the world is at one stage or another of lock-down during the Covid19 pandemic, and ecotourism, which contributes a great deal to conservation around the globe, has come to an abrupt halt, conservation efforts continue in Nepal thanks to conservationists like Anil Adhikari.