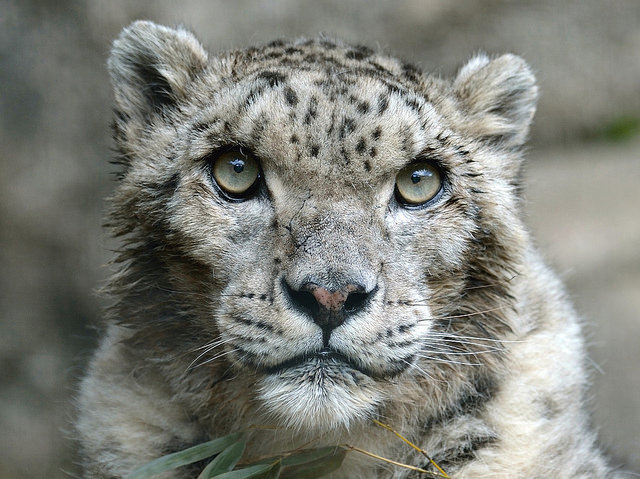 (New York, NY – September 14) The mysterious snow leopard has been delivered a piece of good news. The Red List classification from the International Union for Conservation of Nature – IUCN – improves the conservation status of the big cat from “Endangered” to “Vulnerable.” Yet these iconic symbols of Asia’s great mountain wilderness still face numerous threats, many rapidly growing, in their high mountain home. The snow leopard was listed as Endangered by the IUCN Red List –the globally accepted, international standard for assessing extinction risk—for each 5‐10 year assessment since its initial listing in 1972. The change in status came after a three‐year assessment process by five international experts including scientists from academia and from Panthera, Snow Leopard Conservancy, and Wildlife Conservation Society, organizations active in snow leopard conservation. The assessment was then reviewed and approved by eight international felid and Red List assessments experts, the IUCN Global Mammal Assessment team, and the central Red List Unit.

Dr. Tom McCarthy, Executive Director of Panthera’s Snow Leopard Program and a member of the assessment team, said, “To be considered ‘Endangered,’ there must be less than 2,500 mature snow leopards and they must be experiencing a high rate of decline. Both are now considered extremely unlikely, which is the good news, but it does not mean that snow leopards are ‘safe’ or that now is a time to celebrate. The species still faces ‘a high risk of extinction in the wild’ and is likely still declining – just not at the rate previously thought.”

The assessment cites a number of recent studies that used more scientifically robust methods than in the past and which suggest snow leopard numbers are likely higher than previously thought. Dr. Rodney Jackson, Founder and Director of the Snow Leopard Conservancy (SLC) and another member of the assessment team, said, “Even with such positive supportive information, the assessment team took a conservative approach, including using the lowest estimated global population size of 4,000 when determining if the Endangered threshold could be met.”

One of the reasons that snow leopard status has improved is greatly increased conservation efforts. Dr. David Mallon, snow leopard expert and member of the assessment team, points out that in the last few decades there has been a significant increase in the number of protected areas within the snow leopard range. The species range is extensive, and covers more than 1.8 million square kilometers of mountain habitat in 12 range countries across Asia. Dr. Jackson stressed that local initiatives such as community ranger monitoring efforts and the building of predator-proof corrals to control conflict over livestock losses are helping to protect the cats from retaliatory killing in many locations.

The snow leopard is the top predator of the world’s greatest mountain chains – the Himalaya, Karakoram, Hindu Kush, Tien Shan, Altai, and other mountain regions of Asia. Unfortunately, even in these near-inaccessible mountains, the snow leopard faces numerous threats.

“Continuing threats include poaching for its thick fur and overhunting of its wild prey,” said Peter Zahler, Coordinator of the WCS Snow Leopard Program and also on the assessment team. “There is also an increasing number of domestic livestock raised by local people in these high mountains that degrades the delicate grasslands, disturbs wild sheep and goats and drives them into less productive habitats.” Zahler pointed out that this can also lead to disease outbreaks in wild sheep and goats due to transmission of novel pathogens from their domestic counterparts. “The loss of wild prey can lead to attacks on domestic stock, which itself can lead to retaliatory killing of snow leopards by local shepherds,” Zahler said.

Zahler added, “It is important that a change in status is not misinterpreted – this change does not mean that the snow leopard has been ‘saved’ and efforts on its behalf can stop. The IUCN’s Vulnerable status means a species is still vulnerable to extinction, and the snow leopard population is still believed to be in decline and facing a high risk of extinction. Threats – poaching, habitat destruction, loss of prey species – still exist and new threats such as roads, border fences, and climate change, are increasing.  So conservation actions must continue and be increased to conserve the species.”

About Panthera – Panthera, founded in 2006, is devoted exclusively to preserving wild cats and their critical role in the world’s ecosystems. Panthera’s team of leading biologists, law enforcement experts and wild cat advocates develop innovative strategies based on the best available science to protect cheetahs, jaguars, leopards, lions, pumas, snow leopards and tigers and their vast landscapes. In 36 countries around the world, Panthera works with a wide variety of stakeholders to reduce or eliminate the most pressing threats to wild cats—securing their future, and ours. Visit panthera.org.

About Snow Leopard Conservancy – SLC, founded in 2000 by Dr. Rodney Jackson and Ms. Darla Hillard, aims to secure the survival of the snow leopard, by conserving its mountain habitat, enhancing local livelihoods and alleviating the human-wildlife conflict which threatens its existence. By blending traditional knowledge with modern science, SLC works in partnership with local people, to increase environmental awareness, advance grassroots conservation initiatives and involve them in non-invasive monitoring of snow leopards. By developing an appreciation for this wild cat, the ultimate goal of the Conservancy is to turn conflict into coexistence.  Visit snowleopardconservancy.org.

About Wildlife Conservation Society – WCS saves wildlife and wild places worldwide through science, conservation action, education, and inspiring people to value nature. To achieve our mission, WCS, based at the Bronx Zoo, harnesses the power of its Global Conservation Program in nearly 60 nations and in all the world’s oceans and its five wildlife parks in New York City, visited by 4 million people annually. WCS combines its expertise in the field, zoos, and aquarium to achieve its conservation mission. WCS has been a global leader on snow leopard conservation since the 1970s, with current programs in Afghanistan, Pakistan, and China. Visit wcs.newsroom.org. For more information: 347‐840‐1242.