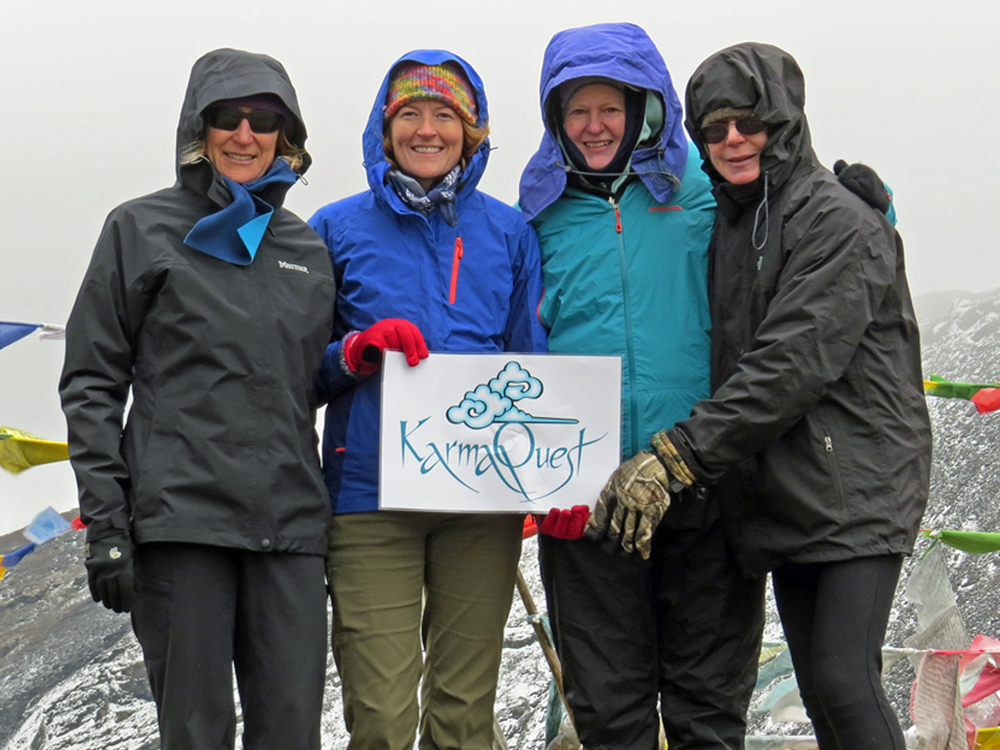 The Kingdom of Bhutan, Druk Yul, (Land of the Thunder Dragon) is often referred to as the happiest country on Earth–a country where they measure their success by Gross National Happiness, rather than Gross National Product.  A country where 64% of the land is covered by trees, and no stop lights exist (the one stoplight erected in the capital city of Thimphu was taken down after complaints from the locals).  A country where men wear ghos, women wear kiras, and children shout “Hello, ma’am” as they pass you on the trails.  Bhutan is also home to the elusive, beautiful snow leopard living high in the pristine Himalayan peaks of Jigme Dorji National Park, and the reason behind my trip to this amazing country. 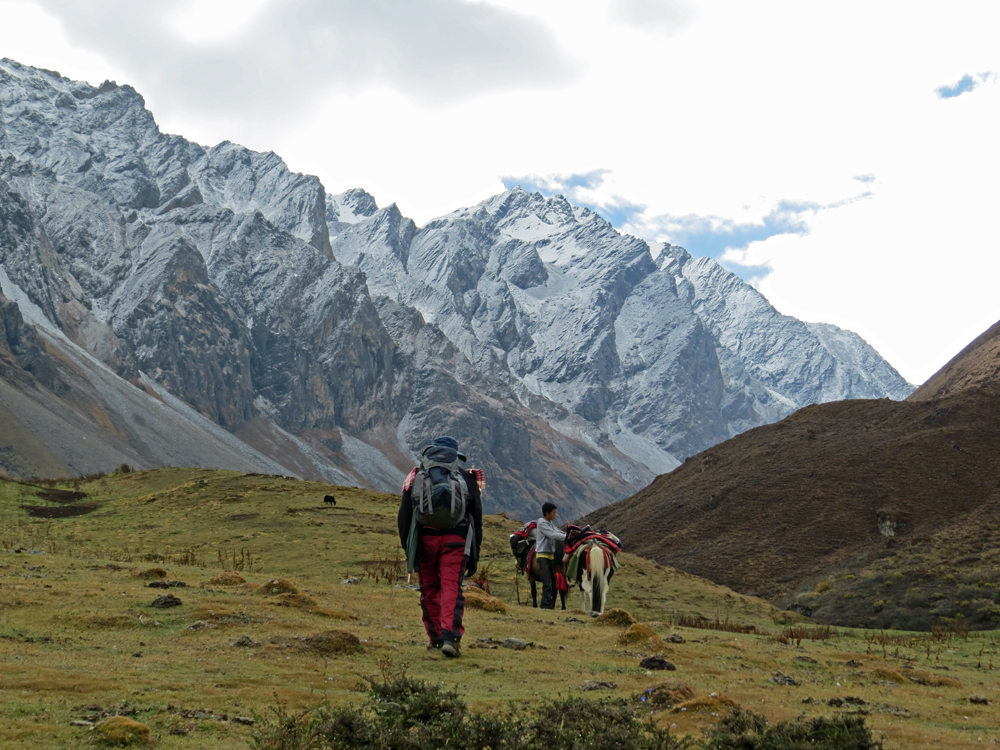 Snow Leopard Conservancy established a presence in Bhutan in 2012 through building partnerships with Bhutan Foundation, Jigme Dorji National Park (JDNP), and the Nature Recreation and Ecotourism Department to develop community-based snow leopard conservation and education programs.  One significant result of our partnership was the creation of the Jomolhari Mountain Festival, also known as the Snow Leopard Festival.  The festival celebrates the people and exquisite natural wonders, including the endangered snow leopard, of the Jomolhari Mountain region.  With the first festival being such a success in 2013, I was excited to join SLC Board Chair Caroline Gabel as a representative of the Conservancy at this year’s festival. 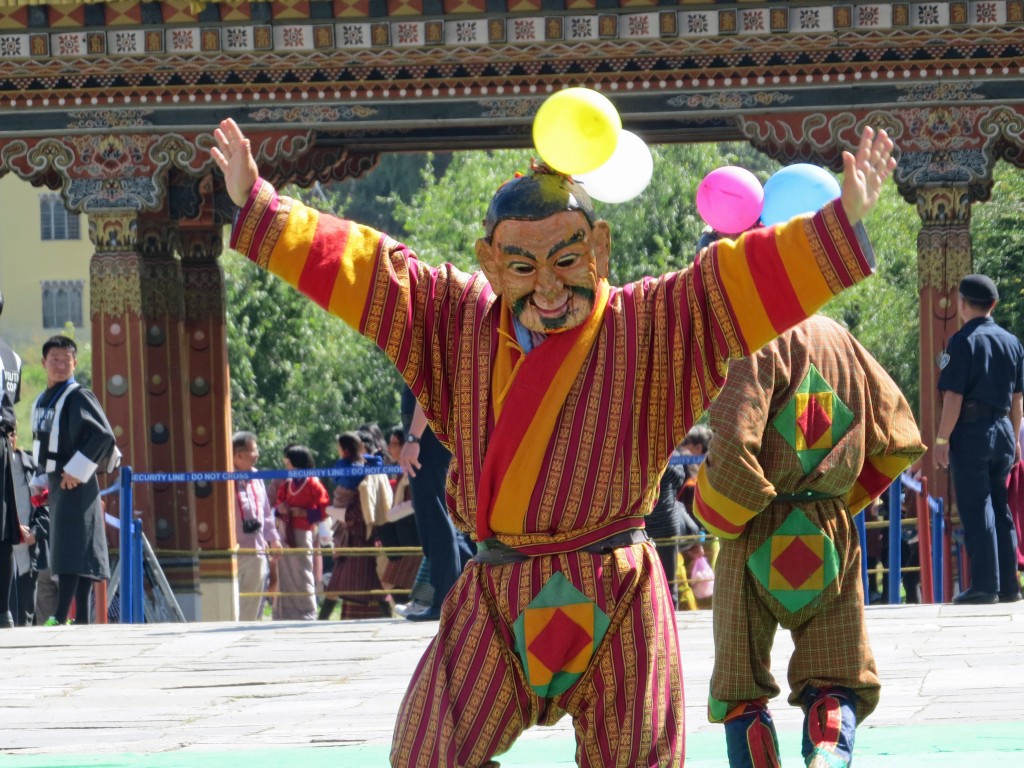 An Atasara (clown) at the Thimphu Tshechu

Working with KarmaQuest Ecotourism and Adventure Travel, a “trip-of-a-lifetime” tour was created to give outsiders the chance to be in the heart of snow leopard habitat, interact with people sharing their land with the cats, and actually see what Gross National Happiness is all about.  The result is the “Trek for Snow Leopard Conservation in Bhutan,” a 16 day trip designed to include the annual Jomolhari Mountain Festival and the new traditional homestay program in Jigme Dorji National Park, both sponsored by the Conservancy, as well as experience many aspects of the beautiful Buddhist culture of Bhutan.  Caroline and I joined KarmaQuest founder Wendy Lama and Alaskan environmental lawyer Nancy Wainwright on this inaugural trip, prepared to offer feedback throughout and after in order to fine-tune the itinerary for subsequent groups. 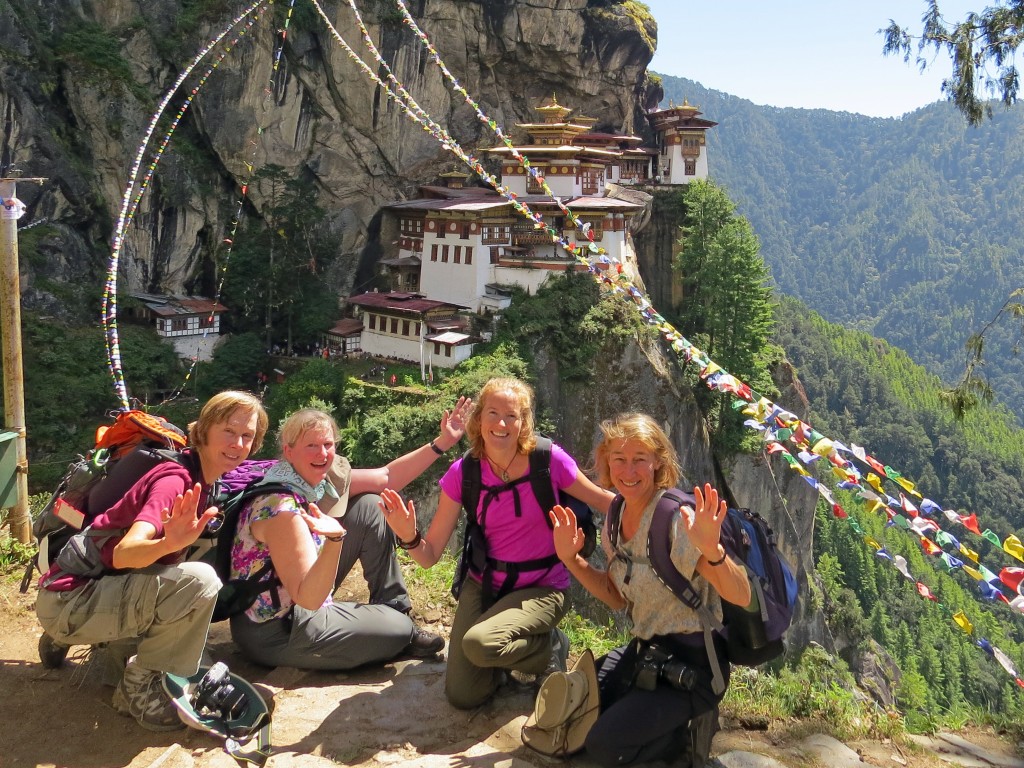 Posing like dakini statues with Taktsang Monastery in background

The first four days focused on the cultural aspects of the country–visiting a wide array of museums and the National Memorial Stupa, hiking to the Taktsang Monastery perched on a cliff 3,000 feet above the Paro valley, attending the auspicious Thimphu Tshechu, and marveling the breathtaking size of one of the world’s largest Buddha statues, the Dordenma Buddha.  We also had the chance to admire the awkward beauty of Bhutan’s national animal, the takin, at the Motithang Takin Preserve. 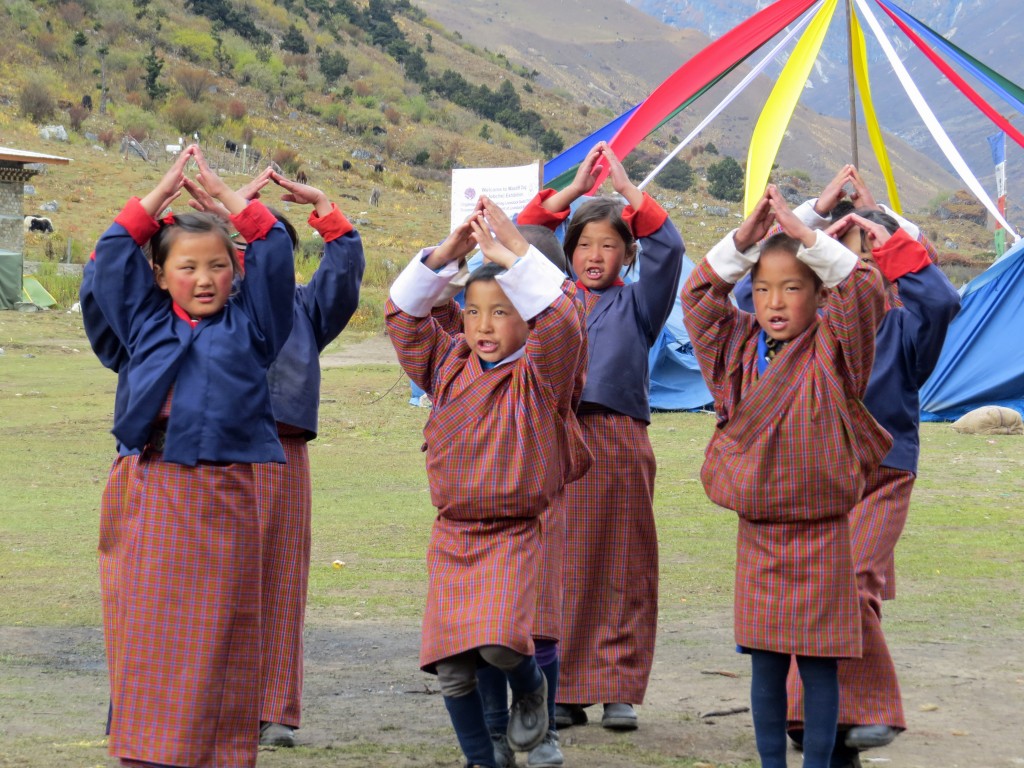 October 5-12 was the actual trek in JDNP.  Three days were taken to reach Soe Chu, the site of the Jomolhari Mountain Festival and our home for two nights.  Following the festival, we crossed Bhonte La pass at 16,040 feet and descended to Soe Yaksa where we were the first guests of a local family participating in the new traditional homestay program. After one night at the homestay, we continued down the mountain for two days to reach the trailhead. (Future blogs will share more information about the festival and the homestay.) 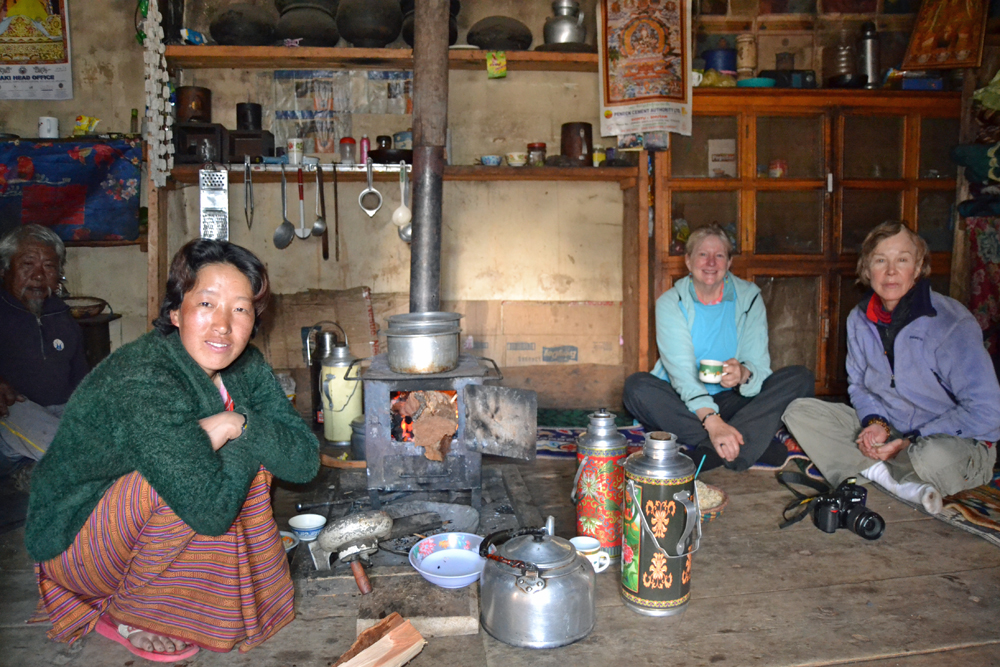 Nancy and Caroline with our hosts at the traditional homestay

The last few days of the trip were spent visiting additional monasteries and dzongs in Paro and Punakha, last minute shopping in Thimphu, and attending a fantastic farewell dinner at the Bhutan Foundation office. 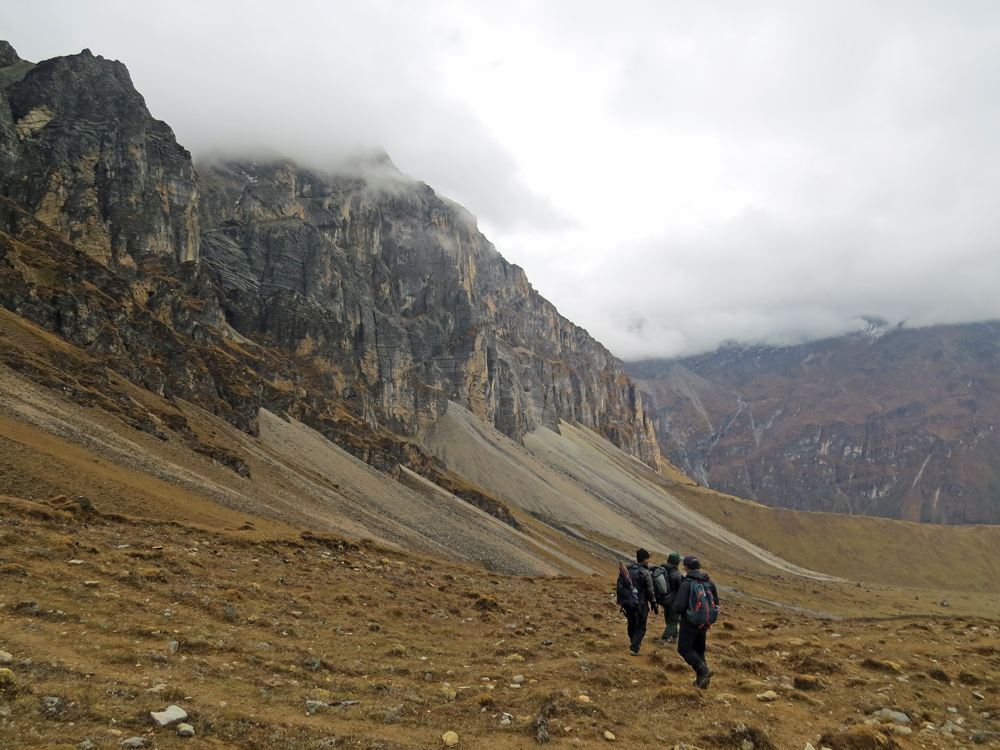 While we didn’t see any snow leopards on the trip, we did see evidence of them–scat, footprints, and the carcass of a pregnant yak recently killed–and I have no doubt we were seen by the snow leopards hidden amongst the cliffs surrounding us.

Visit KarmaQuests.com for information about the 2015 “Trek for Snow Leopard Conservation in Bhutan” and start planning a trip of your own!