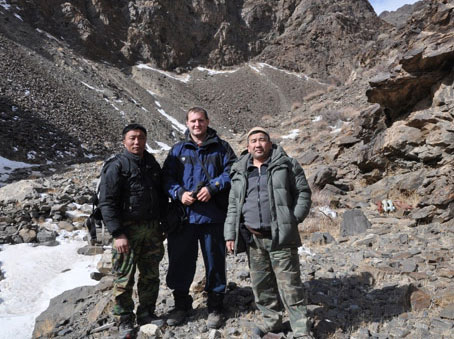 Dr. Jan Janečka, currently at Texas A&M University, but soon moving to Duquesne University, is the Conservancy’s partner in genetic studies on snow leopards. Jan reports that his paper, co-authored with Rodney Jackson, Bariushaa Munkhtsog, and William J. Murphy, is in press for publication in the journal Conservation Genetics Resources.

Once again, the Snow Leopard Conservancy and its partners are innovators in the science of snow leopard conservation.

The paper’s title might be goobledy-gook to us laypeople:  “Characterization of 9 microsatellites and primers in snow leopards and a species-specific PCR assay for identifying noninvasive samples”.  But the results of Jan’s work are significant.  He describes new molecular tools and methods for more efficiently and cost-effectively distinguishing snow leopard scats from other species.  In the field we have learned that even though collecting scat seems a relatively simple non-invasive method of obtaining genetic material from these endangered cats, the confusion with scats from other animals such as foxes can be almost 50%.  This error rate is similar whether an experienced wildlife biologist or a community-based local monitor is doing the collecting.  Accurate and affordable identification of the scats is critical.

Those of you who have read Snow Leopard: Stories from the Roof of the World, edited by Don Hunter and available in our on-line store, will know that Jan is not just a lab geneticist.  His fieldwork and trainings in the snow leopard range countries have informed his popular writing, including his heartfelt account, “Tracks of My Soul,” in Don’s book.

Jan and his family will soon be moving to Pennsylvania, where he will head up a new lab at Duquesne University, and where he looks forward to advancing the work of snow leopard conservation through genetics.  He also very much looks forward to one day introducing his young son to the habitat of this beautiful wild cat for whom he has devoted so many indoor hours.