I descended to Jomsom from the alpine pasture, yesterday, 21 June. I had arrived in Jomsom (Mustang) on the 18th of June on a jeep. There was no guarantee of flights from Pokhara (weather problem), so I had to hire a jeep on 17 June to reach Mustang in the morning of 18 June — the day when the snow leopard scouts committee was formed.

Each and every year a new eco-club network is organized in Annapurna Conservation Area Project (ACAP) – Jomsom in which 11 members will get selected as the eco-club members, to serve for that year, from the student representatives from 11 different schools. This eco-club network is also the snow leopard scouts committee. All members are typically the sixth, seventh and eighth graders. There are reasons why we wish to have the students from 6, 7, and 8 grades [12 to 15 age group] as the snow leopard scouts: This is the age when children are most receptive about everything including nature conservation. These scouts along with other students, teachers, and governmental workers (over 35) were briefed on snow leopard activities. The new snow leopard scouts were then led to environmental/snow leopard camp from 19 to 21 June in the alpine pasture (camping elevation c. 4,000m). In total, 11 new members, one old snow leopard scout, one herder, one local teacher participated in the environmental camp. The program was coordinated by ACAP ranger, conservation education teacher, and SLC coordinator. Among others, the following activities took place – 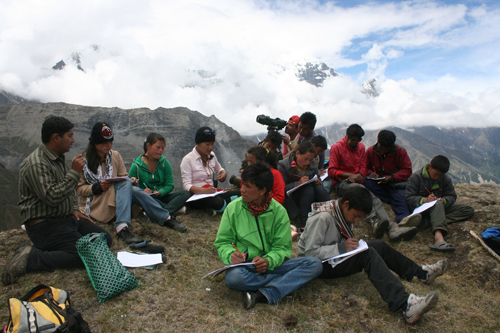 Note that this year students are going to install in total three cameras, NOT nine, as in 2011. In 2011, because the snow leopard scouts (lower Mustang) were able to capture three distinct, adult snow leopards, the plan for 2012 is to set three cameras in best locales where the probabilities of catching the snow leopard is highest. The objective was to monitor the three snow leopards of 2011 in 2012 also. On 20 June, students — after learning about the nitty-gritty of remote-camera technology and operating system — installed one camera in Vrapsa at the elevation of c. 4,559m. The interesting aspect of this year’s camera trapping was that OLD snow leopard scout was instrumental in guiding fresh snow leopard scouts. 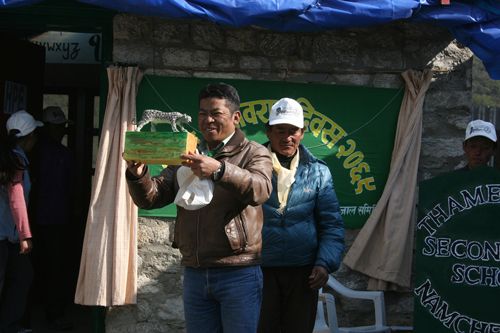 Also attached is a photo image, not from Annapurna snow leopard scouts event, but that from Mt. Everest. If you remember well, I informed you earlier that I, as the representative of the Snow leopard Conservancy, was awarded a snow leopard dummy that students and teachers on Mt. Everest prepared – a strong indication that snow leopard conservation and education program so far conducted have been well received. This was presented June 5, the world environmental day, amid a huge gathering. This was also the day when snow leopard scouts, from eco-club members, were formed to represent the entire Khumbu. Talk to you later. Cheers, Som PS: I am off to upper Mustang tomorrow, 23 June, for ten days or so.