It’s been two weeks since I departed San Francisco for the Altai Republic in Southwestern Siberia. The long plane ride from SFO-LAX-Moscow-Novosibirsk was tiring and it was a relief to meet up with Alice Clark (volunteer for Snow Leopard Conservancy) at the Moscow Airport. I found out upon arriving in Moscow that my baggage had been misplaced along the way! I was worried about the idea of not having my bag (especially my warm clothing) for the upcoming expedition in the Siberian mountains. Our expedition was lead by Biosphere Expeditions (B.E.), an environmentally-focused tour group determined to join scientific field work with everyday people. Jenny Kraushaar, veterinarian and big cat specialist lead us along with Adam Stickler, team leader and Marine Biologist. After a long and tiring next few days, my bag finally came and I tailed the B.E. group a day behind and finally caught up with them. Whew! Let me tell you…it was key to have all of my clothing on this expedition. Once we left the familiar Soviet style city of Novosibirsk (New Siberia), we drove for two days into the Altai Republic. The scenery only got more beautiful as the flat lands drastically changed into vast, green valleys and steep, craggy mountains. To my delight, the Altai Republic is a hub for honey production in Russia. My love for honey seems to follow me as I travel and I was beaming as we passed small wooden stands along the road with Altaian people selling 1.5 litre beer bottles now filled with deep yellow and amber honey.

After we went through border control (our camp was just a few dozen kilometers from the Mongolian border), we drove through the darkness to the base of the Talduair mountain range in SW Siberia. This area is not known for an evident population of snow leopards but with a growing prey population, Biosphere Expeditions has hopes to find evidence that these mountains are suitable snow leopard habitat. So, we set out as amateur scientists into the long valleys and high mountains of the Altai in search of snow leopards and their prey species. We had multiple methods of recording our data: scat collection, camera traps, recording of tracks and snow leopard scrapes. It was very fun to spend hours in the mountains, surveying the landscape with binoculars even though most days did not produce sightings of argali or ibex and never of a snow leopard. The Chickachev Ridge, just on the other side of the Mongolian border is known as a hot spot for snow leopards but unfortunately due to permits, we weren’t allowed to survey the area. Fear not! We found plenty to do and were excited to see the wild ibex and argali while in the Altai, confirming that the area is promising for the flourishing of our beloved snow leopards. 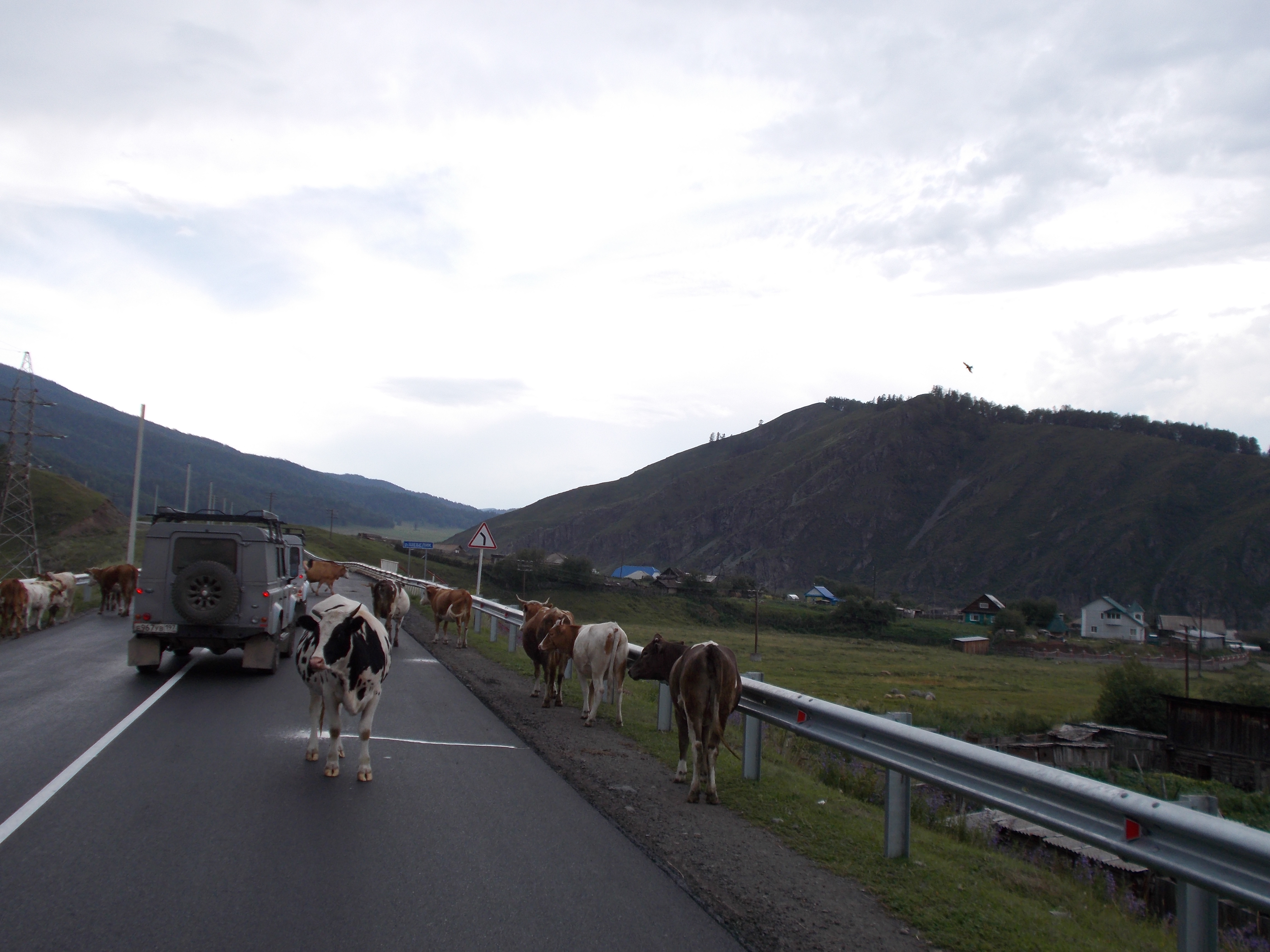 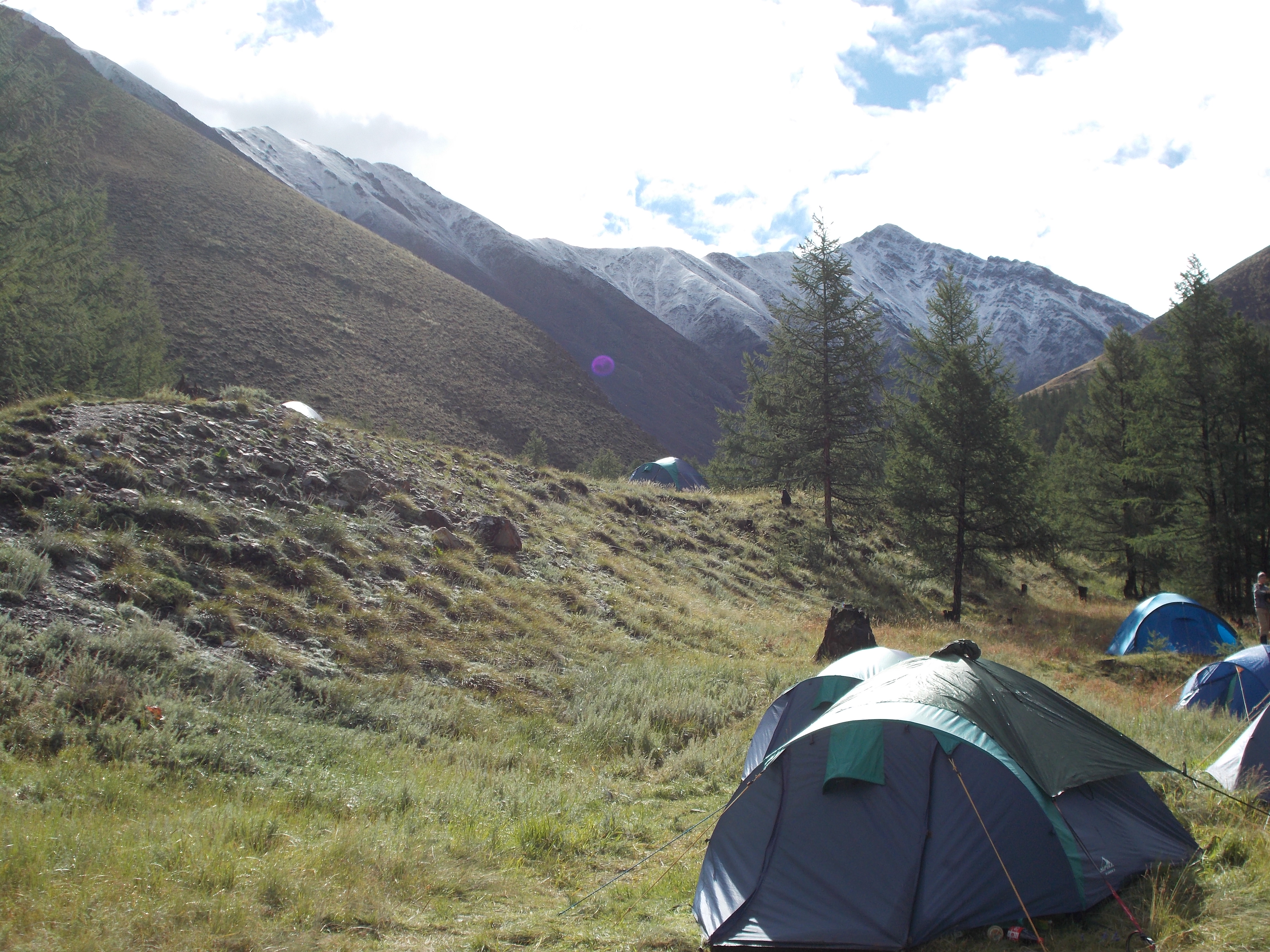 Here are some highlights from our expedition:

Among many treks, our voyage to a remote glacial lake was incredible! After traveling through the lush green valley, we came to a wall of rocks that we climbed with the guidance of Oleg, our guide and human mountain goat. Not only did Oleg carry himself, his large pack, and fire wood, but he also carried the pack of someone else! He scaled the crumbling skree and dense boulders with grace. There were plenty of Lord of the Rings comments and I couldn’t help but feeling like Gollum, grasping from rock to rock as we climbed higher and higher 🙂 Once atop the mountain of boulders, we set eyes on a stunning glacial lake, probably only seen by a handful of people on earth. The camera traps were atop the high ridges and we left the advanced group, who planned to retrieve the cameras the next day. Unfortunately, a heavy blanket of snow covered them during the night and they were forced to come back to base camp, soaked from cold rain and snow, before getting the cameras.

This is Oleg making the treacherous ascent: 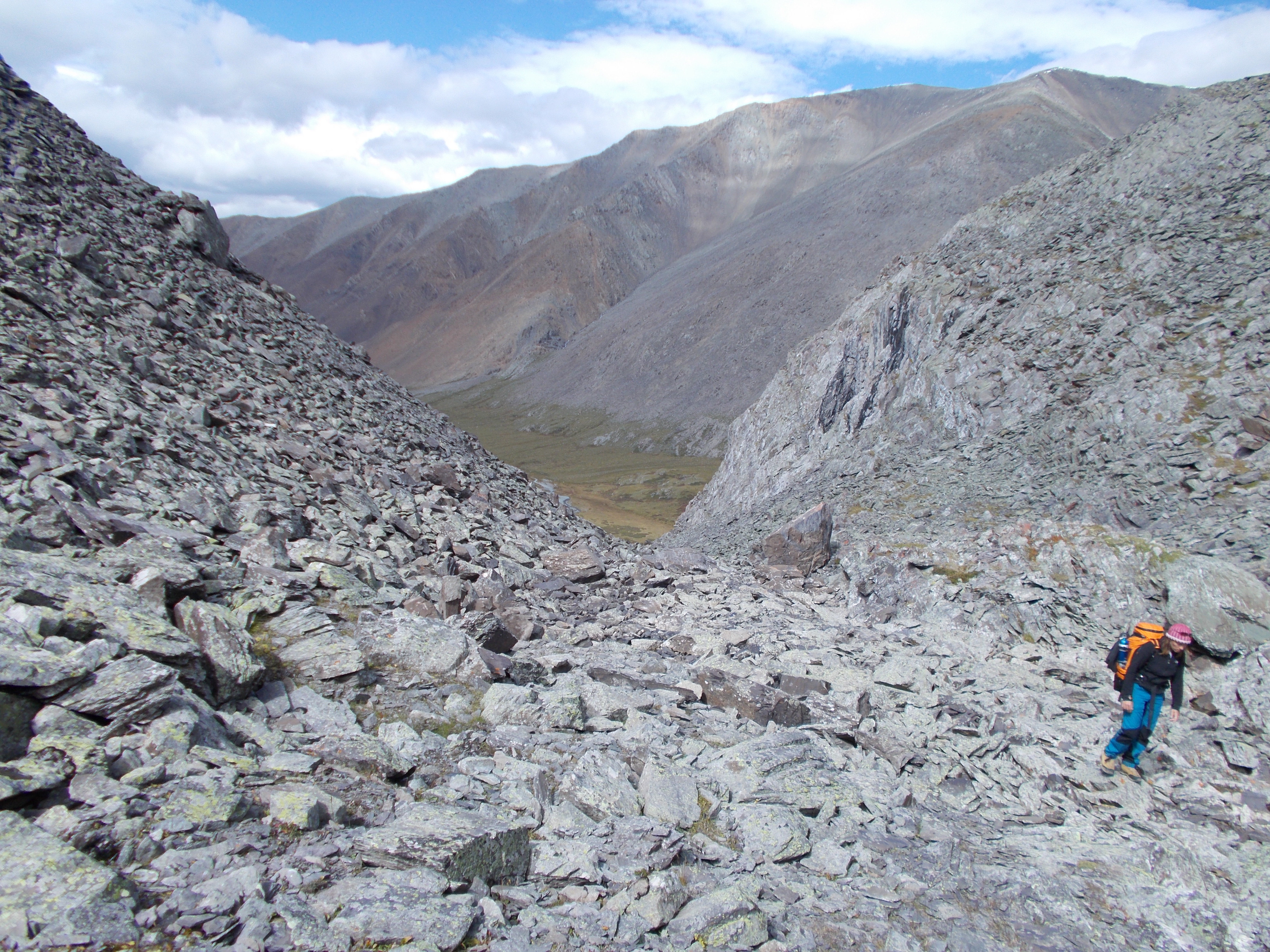 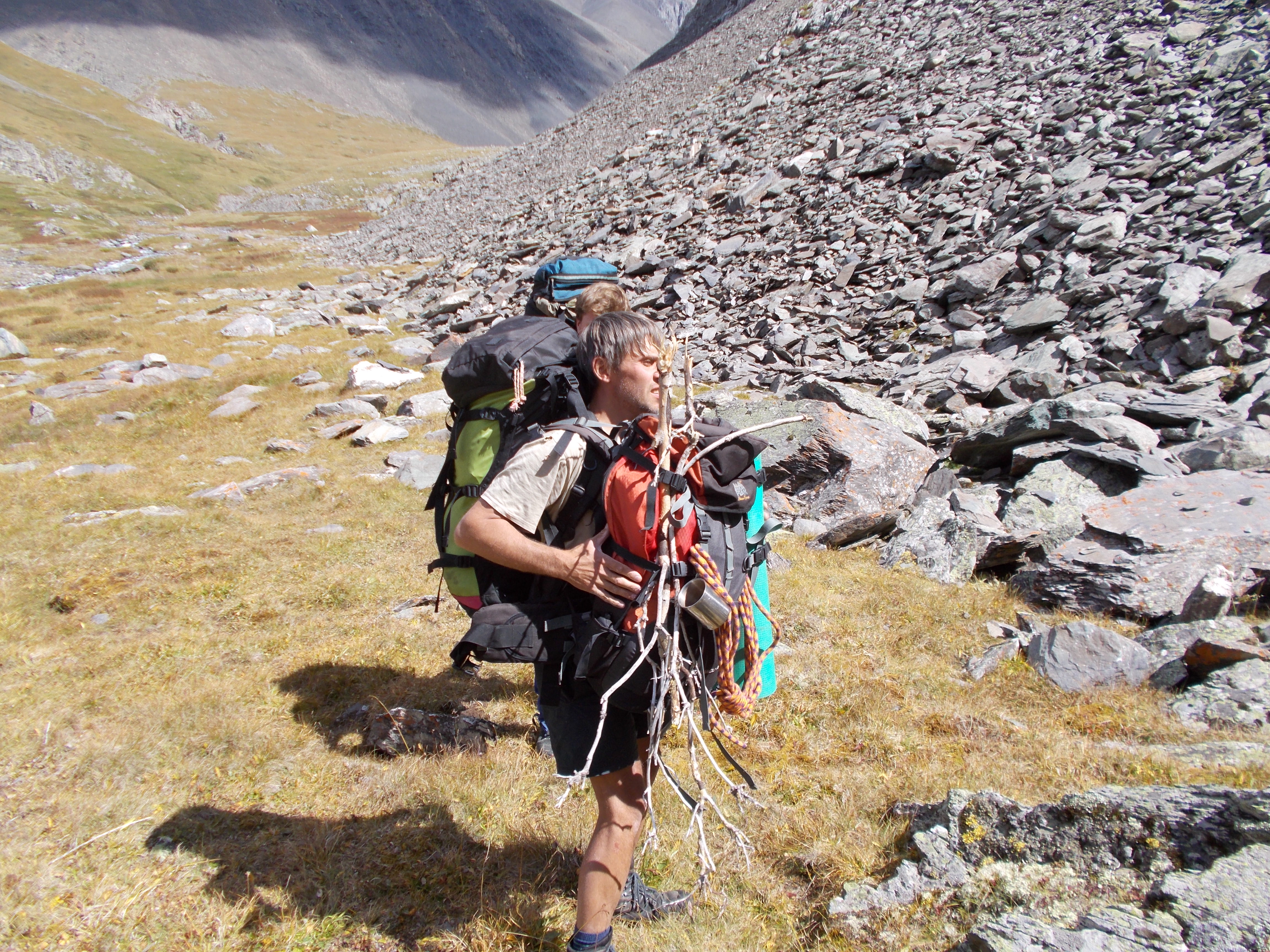 Here is a snow leopard scrape we found: 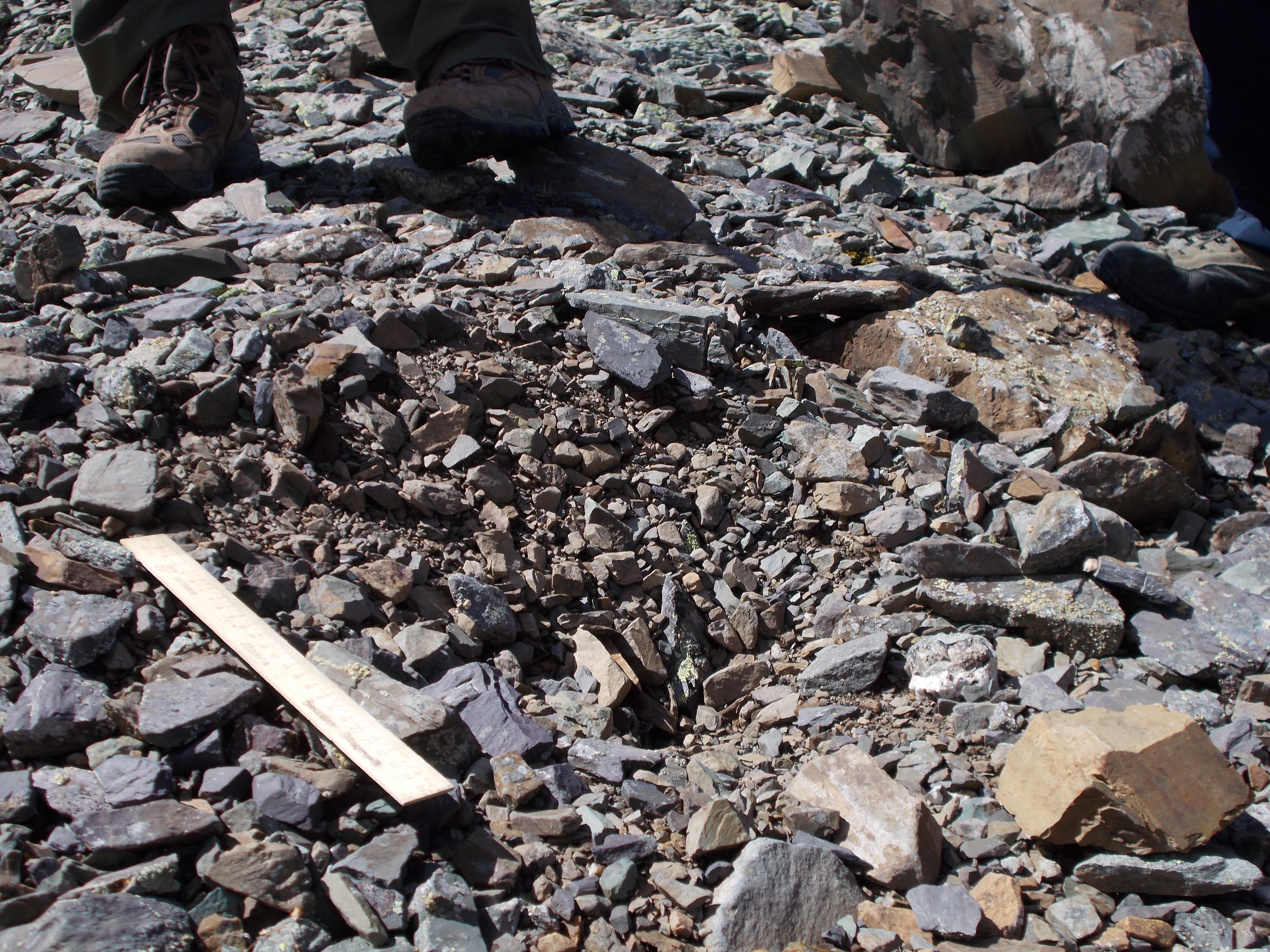 Alice and I at the lake: 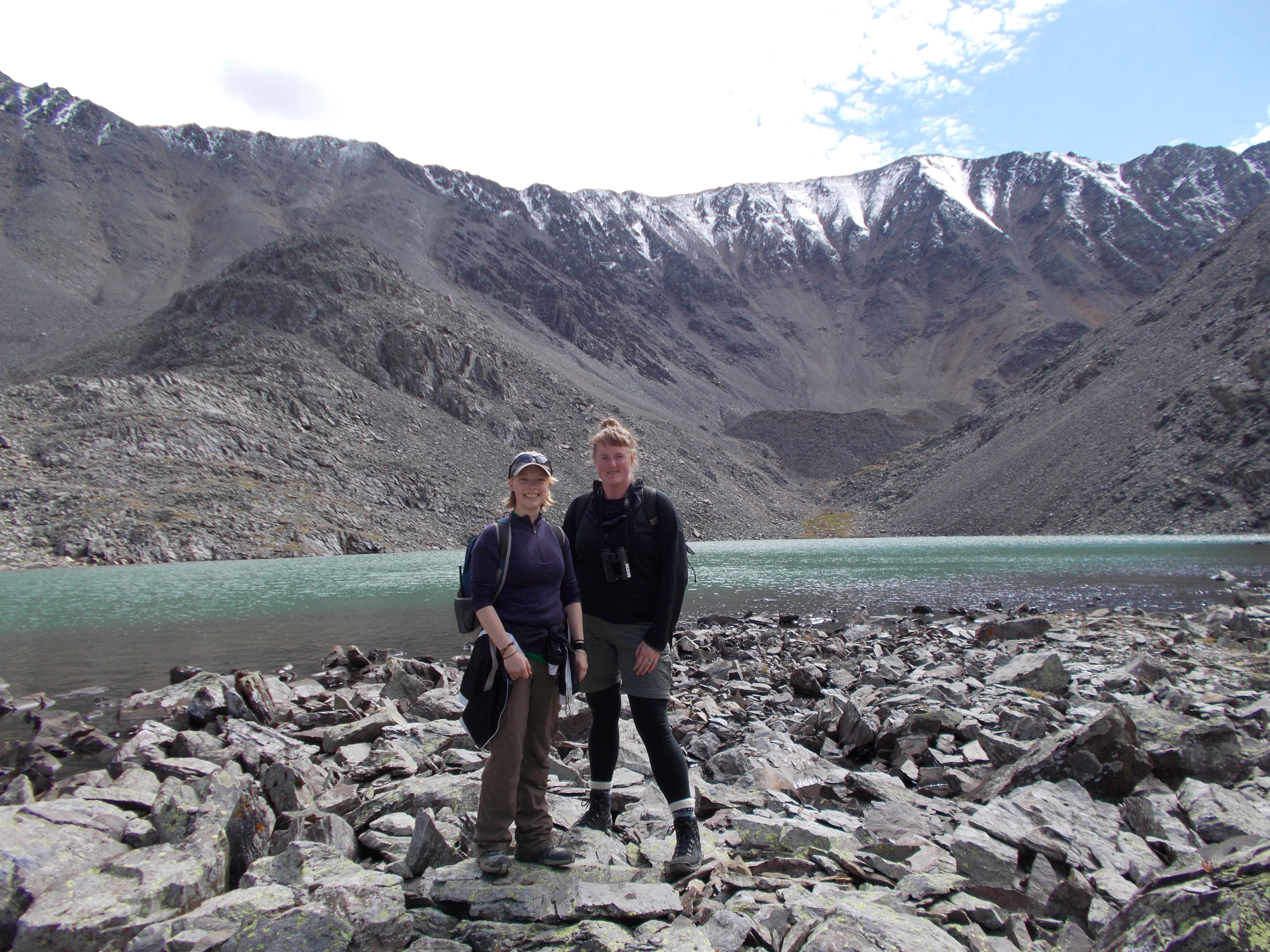 We also were able to do some anthropological research and touring of the area. Genia, the Russian scholarship student of Anthropology from Novosibirsk brought us on a tour of ancient burial mounds in the area. Much of the Altai and surrounding areas are precious anthropological sites, with burial grounds and petroglyphs dating back to 1,000 B.C. She brought us to see Turkic burial grounds or Kurgans (mounds of stone 5-10 feet in diameter surrounded by square stone boundaries dating between 1st and 12th century A.D.), Scythian burial grounds (with circular stone boundaries representing the sun, moon, and circular nature of life and death), and petroglyphs that laid among the mountains speckled with petrified wood in the steppe. Genia spoke of the importance of these cultural monuments and naturally I thought of the controversy of building a pipeline through the Ukok Nature Reserve in SW Altai. This horrible prospect the pipeline is deeply rejected by many Altaian people as it will disrupt one of the most sacred sites in all of Siberia. 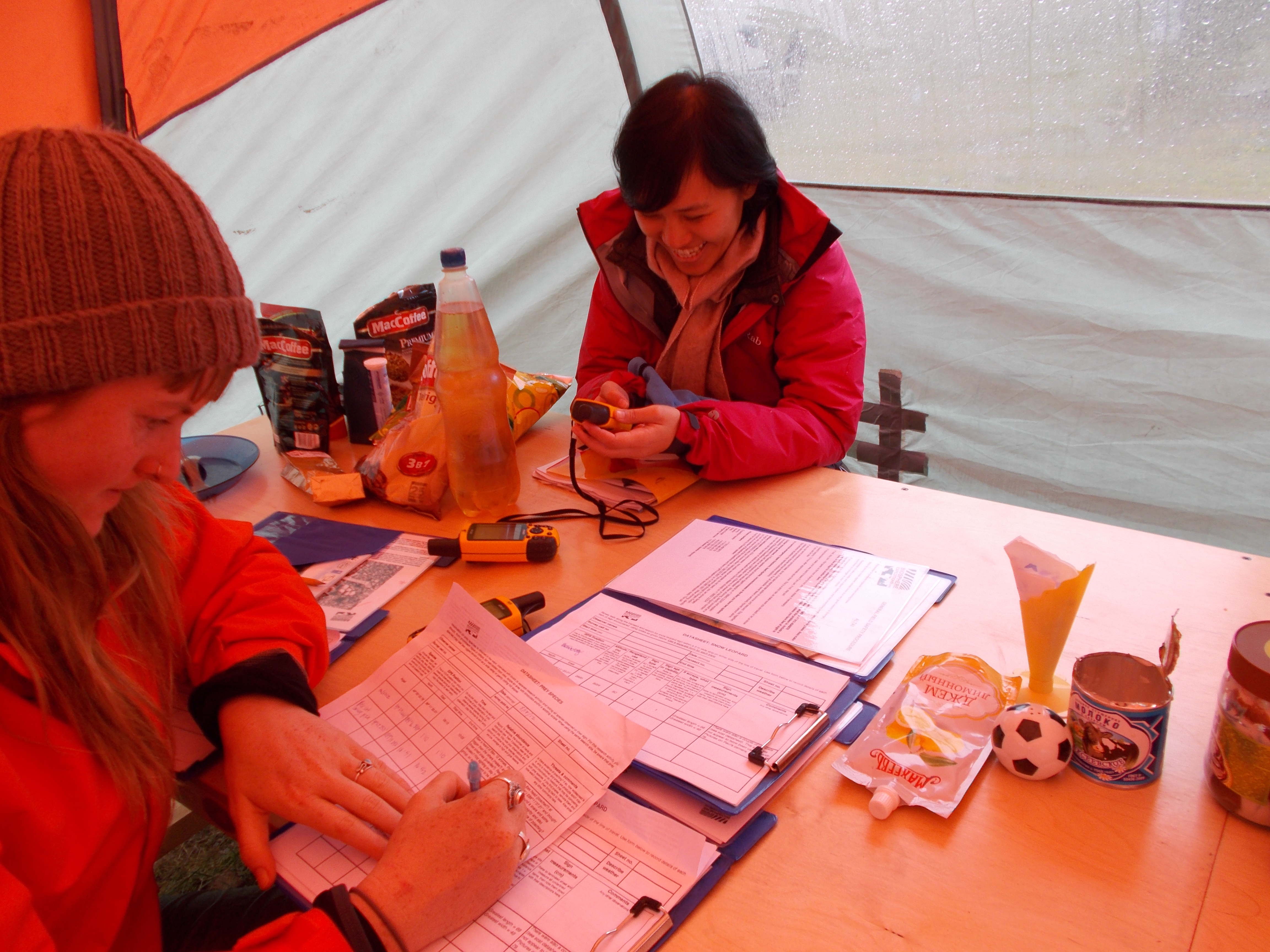 Wan Lin and I compiling data in the mess tent

On our last day with Biosphere, we took the Land Rovers across the steppe to meet local herders and ask them about their experience with snow leopards, pallais cats, argali and ibex. This was very interesting as we had little interaction with the local people and we wanted to know their views on snow leopards. What we learned is that snow leopards have very little presence in this region of the Altai; the herders expressed an indifference to the animal as they haven’t had negative encounters with the cat. The herders live a harsh life on the Siberian steppe and rely greatly on their livestock for sustenance and income. The pallais cat (manul in Mongolian/Russian) has a greater presence and due to their smaller size, do not threaten the livestock.

This concluded our two weeks with B.E. and Alice and I were dropped off in Kosh-Agach to meet our lovely interpreter, Natalya, and attend a meeting involving WWF Altai and Mongolia. The meeting took place in the new Snow Leopard Musuem, which is a beautiful wooden yurt with a traditional low door that forces all visitors to bow as the enter the space. We were able to gather that snow leopards are very present within multiple regions in transboundary of Russian-Mongolia. The goal of this meeting was to write a proposal for the Darwin Initiative Award which assists countries that are rich in biodiversity but poor in financial resources to meet their objectives, this specific objective being to increase the livelihood of local people while decreasing the threats to the endangered snow leopard. The meeting was centered around the goal of the development of souvenir and goods production into the National and International markets. With cooperation between Mongolian, Russian and British experts, Alice and I eagerly soaked in the complicated process of developing a comprehensive and culturally sensitive proposal.

Now, we relax! Ah, yes, the sweet comfort of a bed with a hot shower and fresh bread, cheese and Altaian cuisine. We were treated to a lovely dinner with Maya, a woman who is a cultural expert of the Altai and fantastic cook, to boot. She graciously invited us into her home and served us a dinner of sliced meats and cheeses, cucumber and tomato salad and a local dish of fresh lamb, rice, and vegetables called Plov. The real cherry on top of the night was when she shared her white honey from Onguday, which tasted sweetly medicinal, like it healed with every spoonful! With the help of Natalya, we conversed with Maya about working in the Altai and her visits to the states. And on top of it all, we were delighted to meet her 8 month-old son, Tengis (‘of the heavens’ in Altain).

We have just met with Chagat, the director of the Foundation for Sustainable Development of the Altai (FSDA) and we will carry on our journey tomorrow morning.

Sending positivity from the Altai! This place is truly beautiful, in so many ways.

p.s. I would love to post more photos but the internet is acting up! More soon!